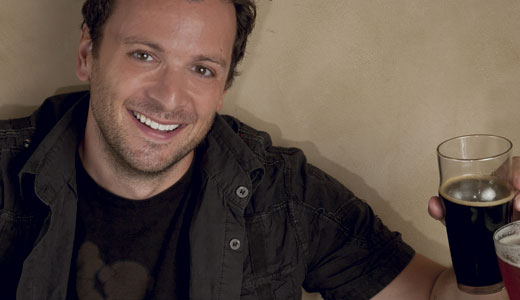 Zane Lamprey has my dream job — to travel the world and drink. Best known for his show “Three Sheets,” which aired on the Travel Channel, Lamprey now has “Drinking Made Easy,” where he profiles U.S. cities and their drinking customs for AXS TV. Louisville is featured in tonight’s episode (8 p.m., Insight channel 928); he stopped by Buck’s, BBC, the Belle of Louisville, and a few other familiar haunts. I caught up with him last week by phone.

Zane Lamprey: Are you drinking with me?
Bar Belle: Actually, I have some rye whiskey right here.
ZL: I’m not really drinking, but I like to have the illusion that I’m always drinking.
BB: Exactly! I mean … what?

BB: Was this the first time you were in Louisville?
ZL: I did a “Three Sheets” episode once in Kentucky, and we shot a little bit in Louisville. We went to Bourbons Bistro and got a little nutty there, but it was fun. So I had been there before, just not sober.

BB: What did you enjoy most?
ZL: The drinking. (Laughs) It was a good vibe. It was nice to get to see a really broad picture of the drinking culture there. Yes, of course, bourbon is really important, but it’s not all there is to do.

BB: How does bourbon stack up among your favorite things to drink?
ZL: I love bourbon. If you took the five major spirits — vodka, rum, tequila, whiskey and gin — whiskey is the least mixable of those. But you guys figured it out with the julep. If you’re going to have a whiskey cocktail, that’s it.

BB: Well, what is your favorite drink?
ZL: I’m a beer guy. I’m a rum guy. I hope that doesn’t alienate any Kentuckians.

BB: Have any secret hangover cures?
ZL: I’m working on one right now — not a cure but an actual hangover. A big breakfast and some time. I’ve tried the weird ones, and they don’t work. Spicy foods is one of those. I spoke to a physician about what was actually happening, and they said, “Well, a hangover is ridding your body of toxins from the night before.” But it’s also the dehydration. Spicy food depletes you of more hydration, so people want to think they’re sweating it out, but they’re actually not really helping. As is the case with more booze. Ultimately, the only cure for a hangover is either don’t start drinking or don’t stop.

BB: If you could look into the future and saw that your liver was going to fail tomorrow, what would your last drink be?
ZL: I probably wouldn’t have another drink! (Laughs) But if you’re asking me the last drink I would have before I die, then it’d be the strongest thing, because I don’t want to remember.

BB: What’s your favorite drinking city?
ZL: Oh, Louisville by far! And that’s just because I’m talking to you. We pick each of these destinations because there’s something to feature there. At this point, I’ve done over 100 episodes of drinking shows, and when I’m in the city I’m featuring, it’s the best. We’re out drinking with people who are passionate about the city, the country, the drinks. You’re surrounded by this passion, you’re drinking something that elevates your mood, and so when you’re there, it’s the best. People ask me what my favorite drink is. It’s the one I’m drinking at the time.

BB: Are bars the ultimate unifier?
ZL: People are people. We sound different, we look different, we have different customs, but ultimately, you get us in a bar and having a drink, and we’re all just there to relax and have a fun time.

Drunk Texts of the Week
• If you’re going to piss yourself, wear black
• A bush in hand is worth two birds in pants
• How did you get earmarks on your thighs?