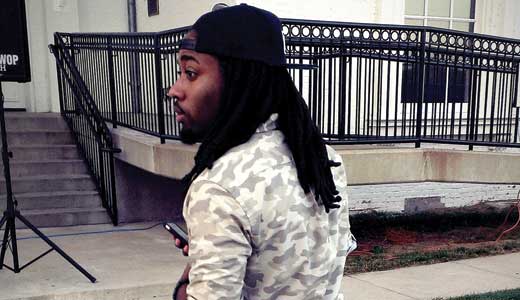 Perhaps no other emcee in the city can carry as much confidence on the eve of his new album’s release as Jalin Roze. It’s been more than a year-long wait for Grand National Dreams, an eternity in rap years. The team is back: Roze and producer Josh La Rock, now Louisville-based, are able to cook in the same kitchen at last; no more email-tag and waiting for green Facebook dots.

Grand National Dreams acts as album title, marketing scheme and mission statement all at once. A 1987 Buick Regal Grand National served as the instant winner in the childhood “that’s my car” game to young James Lindsey, then TARCing his way around town.

“I feel like the songs we do and how we release them is like the Grand National,” he says of the limited edition, supercharged, all-black-everything muscle car.

At the same time, the title can be taken literally. Roze is poised with this album to finally break out on a larger stage. He’s had conversations with a few smaller labels, local and otherwise, but is willing to take his time to find the right opportunity.

“It’s a risk to do it slowly,” he acknowledges. “If you take too long, you can be forgotten.” At the same time, “How can you market me in a proper way?”

Roze realizes some labels have kicked his tires purely off his buzz but have never worked with an emcee, or someone so fully realized. If he can sometimes speak loftily, don’t take it as an inflated ego. This is someone as dedicated to his craft as to the business, so when he speaks of Dreams as “more of a piece of art than music,” he’s including the performance piece, the listening party, the videos, merchandise, and release show. It’s all one living thing.