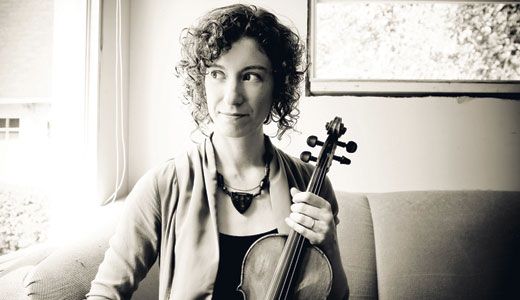 Fiddler Rayna Gellert of Asheville, N.C., has had a prolific career playing with everyone from Bela Fleck to Robyn Hitchcock, and now steps out with a new solo album. She plays at Please & Thank You on Wednesday, Oct. 17, at 7 p.m.

LEO: Can you tell me about working with Kentucky boys Nathan Salsburg and Ben Sollee?

Rayna Gellert: I love Kentucky boys! Excuse me: Kentucky men. Both of those fellas are an absolute joy to play with. Ben is such a fun musician. We met because Otis Taylor threw us in the studio together to play on his record, and as soon as we started playing, Otis was like, “Are you two related?” It just clicked. And I’m so indebted to Nathan — he was involved with my album from the get-go and brought so much musicality and thoughtfulness to the whole process. He’s a dear friend and deeply knowledgeable musician. And we love all the same dead guys!

LEO: Is it harder to step out front and be the singer/bandleader, or to be part of an ensemble?

RG: Right now, I’d definitely say stepping out front to be the singer and bandleader, because that’s what’s new and challenging for me. I’m excited to learn how to do it, though. And I still have plenty of opportunity to be a sideman, which I love. These days, I’m mostly getting that fix from playing with Scott Miller, who’s a great inspiration for me as a songwriter.

LEO: How do you balance playing traditionally inspired music in the modern era? How do you keep it sounding fresh and new?

RG: Good traditional music always sounds fresh to me — I don’t think anything needs to be done to keep it that way. My current musical adventure isn’t about sounding “new” so much as it’s an attempt to follow my own creative vision in a way I haven’t previously. One aspect of this is writing songs, and another is treating traditional songs differently than I have before.