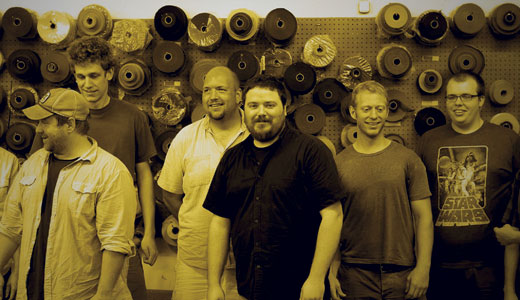 Saxophonist Drew Miller might have looked normal enough on the outside, but for a few years, he was carrying around an atypical idea for a band. “The inspiration behind the band’s inception came primarily from Tortoise, Jaga Jazzist, Zappa, Orchestre National de Jazz, The Sun Ra Arkestra, my time playing with Lucky Pineapple and Another7Astronauts, and as an outlet for me to write and arrange for a larger ensemble.”

His dream band, D’Arkestra, is now releasing their first album, Ghost Town, with a release show at the Tim Faulkner Gallery on Halloween. Miller likes the location because “it is a non-traditional type of venue with great atmosphere, especially the performance space that we will be using,” he says. “So we want to put on a relaxed, informal performance, and a really fun hang.” The $3 all-ages event starts at 9 p.m.

Miller says he realized his creativity hadn’t been fully satisfied merely playing others’ music. He started writing and arranging. “As I got deeper into the process, I was really energized by the endless possibilities that the instrumentation and size of the group presented in terms of texture, ‘arkestration,’ and ways to use the instruments.”

Miller realized early on that being focused on one form would never satisfy his musical impulses. He put himself into many different settings, from rock to jazz to experimental music, and approached even being an audience member as a form of research.

“I decided a long time ago that, to be viable and relevant, I needed to gain as much perspective as possible … If you are proficient on your instrument and are hungry to make music and be creative, you will feel at home no matter what style or genre.”

To hear the music, go to darkestra.bandcamp.com.