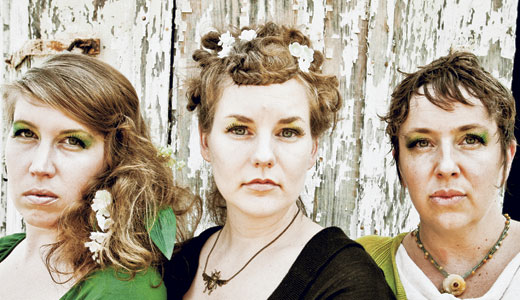 Lugging equipment from venue to venue, many bands only dream of leaving all that hassle behind. Suki Anderson, Amber Estes and Rebecca Dennison never had to worry about that.

After playing in several different bands, the trio decided to form their own powerhouse, Sandpaper Dolls. This time, their vocal chords alone were enough. “No matter what culture you’re in, everyone connects with the human voice,” Dennison says. “We’re good at doing unusual things,” Anderson adds, “but not to the point it’s a gimmick. You can push the envelope without pushing things too far.”

Capturing those tiny moments on tape is another challenge. They recorded Sandpaper Dolls over three years, catching the natural reverb of a church, the creepy vibes in a studio above a funeral home in west Louisville, and some classy moments inside a cave on Lexington Road.

“It was rough,” Anderson says. “There was an old mattress in the corner. It was like mud everywhere, it was just this slippery mud fest. It was really fun. It was like being in a hobbit hole almost. Actually, a hobbit hole probably would have been nicer.”

To keep dry in the dripping cave, they held umbrellas over them the entire time. Producer Kevin Ratterman carried a gigantic tape machine into the cave, covering it and all the cords with plastic.

For their album release show on Nov. 9 at 8 p.m., Sandpaper Dolls will take the stage at Meat, surrounded by candles and as many people as can fit. The night is bittersweet, though. After five years together, this landmark night also marks Dennison’s departure.

She’s leaving after what she calls a dry creative season and a need to refresh. The parting is amicable, and Estes and Anderson are already rehearsing with a new member.

So, just as these three walked into one another’s lives, leaving the clutter of instruments behind, they continue their journey. They’re walking away from a longtime partnership but headed toward a bright future.