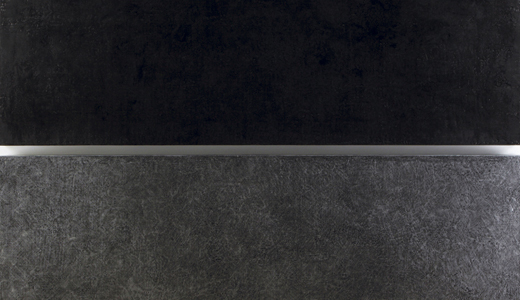 This month, while the leaves on the trees started to change colors, the windows at Zephyr Gallery were covered in black. Gallery members Letitia Quesenberry and Chris Radtke installed their show “LIGHTBOX” by blocking out the light in the usually sunny downstairs gallery so that Radtke’s single large-scale work could be viewed in the half-lit downstairs, while Quesenberry’s multiple works upstairs could sit in the acerbic afternoon light on the floor above.

The dark windows are a challenge. You have to decide to enter in order to see what is inside. After your eyes have adjusted, you are immersed in a quiet show suffused with the atmospheric electrics of loss. Throughout the exhibit, the viewer’s perception is shepherded between light and dark, the sharable and the specific; Radtke and Quesenberry’s work contracts and expands together to breathe a personal and collective sigh. Although both resisted the urge to make the implicit explicit, “LIGHTBOX” is full of Stephen Irwin, respected artist and close friend to both women, who passed away from a sudden heart attack at the gallery in December 2009. “It was as if there was a conversation happening between the three of us,” Quesenberry said of the months leading up to the show.

Radtke’s piece in the downstairs is a continuation of her “Ghost (wall)” series, pitched like a blanket fort down the spine of the gallery. You walk through a loose tapestry of sealed dark mesh boxes, each large enough to contain Radtke’s body. A continuation of her previous self-referential minimalist work, the structure is light but feels slick and flexible, like a membrane stretching from the front door to the room where Irwin reportedly passed away. I can imagine this structure would be the kind of place you could take someone to illustrate the persistence of grief — not only the way it has morphed Radtke’s previous “Ghost (walls)” (doubling them up, bringing them closer, darkening them, pulling them in closer proximity to the body), but also as something that can hold more than one person at a time.

Quesenberry’s art references techniques Irwin utilized, namely his trademark erasure of compositional elements that she has hybridized with her own photographic abbreviations. In her Polaroid series “Instant,” Quesenberry uses planes of white to grant ambiguity and emphasis to her photographic subject, as Irwin did. There seems to be something innately shy about this series that Quesenberry is aware of but is keeping from the viewer — as if she is capturing something she’s not sharing. In her “As of Yet” series, layers of wax have been poured, mimicking the obscured compositions of the Polaroids. She repeats the wax layering technique for two huge panels, on one black and one silver in her “Union of Opposites” piece — the surface of which is hatched and marked in repetitive, methodical motions. “Union of Opposites” is hard to enter, as minimalist works sometimes are, but in context, it brings to mind the rote mechanics of mourning and the centering of consciousness that is brought on by menial meditative tasks.

The real intangible stunner is Quesenberry’s installation “The Offing.” As she cloaks her smaller works in white light to keep them private, “The Offing” generously envelops the viewer completely in blackness and the ambient sound of rain. As I entered, my eyes struggled to adjust and I did not want to take my hand from the wall. I was afraid. The darkness is weird and anxiety producing; it was difficult to find the edges of the room. Set up by the other works, it is incredibly moving; it carries the dark fragrance of the Rothko chapel, that human desire to be dissolved in darkness in times of pain. As I stood there, trying to feel comfortable in the darkness, I wondered if it was practice for what is to come — whether it is the loss of someone I love or my own departure. It was simple, elegant and chilling. “LIGHTBOX” is absolutely worth venturing in to.