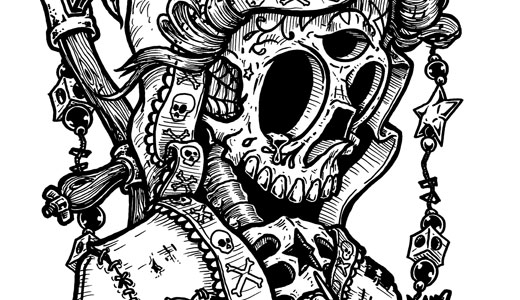 Louisville artists Jeral Tidwell and Justin Kamerer have become known well beyond these borders for their dark-tinged artwork, full of fast cars, interesting women, kooky characters, tattoos, decay and beauty. This week, they celebrate the release of their new book, “Amigos de los Muertos” (made in collaboration with fellow artists Roberto Jaras Lira and David Lozeau), and its inspiration, Mexico’s Day of the Dead holiday.

The holiday honors those who have died, and in tribute to the traditional practice of building sugar skulls to be used as part of altars, sugar cookies are planned for the signing at Ultra Pop.

The book began when Tidwell and Kamerer, partners in Crackhead Press, were in Northern California on a business trip. Facebook called them into their headquarters to make some art last spring, and, on a side trip, they stopped into the headquarters of Last Gasp Publishing, a leader in underground comics and books since 1970.

Though the Louisvillians have published their own “Ink Alchemy” book series with another publisher, they were excited to work with Last Gasp, who have also published legends in the field from R. Crumb to Mark Ryden. Ryden’s 2003 book “Blood” offered a template, from its size to its structure.

Kamerer designed the book, which includes a faux leather cover, gold foil stamping, gilded edges and a purple ribbon tucked inside. Having access to Last Gasp’s printing facilities helped produce the high quality publication, which he modeled after “Bible-y stuff.”

“I wanted it to look, at first glance, like it was actually a mini-Bible. Originally, we were going to have it in the tiny pocket ones that they give out on campuses. But then we realized that our art shrunk down that tiny would be a big, blobby mess.”

The Day of the Dead theme also offered a chance to do some drawing in the style of Mexican artist Jose Guadelupe Posada, known for his satirical work with skeletons. Religious imagery runs throughout the four sections of the book, along with the grim reaper, skulls, beasts and other animals.

The locals met Jaras, who lives in Santiago, Chile, when he came to Louisville to visit a cousin. A fellow artist at the UnFair recommended him to Tidwell, and he has returned to work with them. He will be in attendance at the signing on Friday, which will also feature deluxe editions of the book.

“It was cool watching him learn really quickly, watching his skills enhance with us pestering the crap out of him,” Kamerer says.

As a Chilean, Jaras is quick to point out that the Day of the Dead holiday is as foreign to him as it is to Americans. Still, it’s a fun theme for art.

“I’m pretty sure that all four of us are in love with religious iconography, in general,” Kamerer says. “So that’s fun to do.”

Death has always been appealing to Jaras because it’s an integral part of life. “For some reason, unfortunately, Judeo-Christian culture has given it a different twist,” he says. “My intention was to bring some of the cheerfulness and goofiness that permeates both life and death. We’ve become too scared of death, and like my grandfather used to say, we should be worried about the variables, not the constant,” he notes. “It’s the ending of one thing, but the beginning of a new life. That’s the whole purpose behind these flowers coming out of skulls — life coming out of death.”