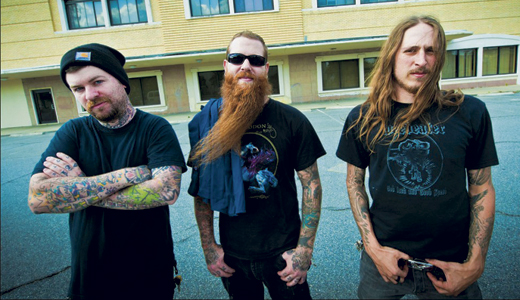 Jonathan Athon, bassist/vocalist for Savannah, Ga., sludge-metal band Black Tusk, is a sweaty mess right now. But not because he has just wrapped up a show and stepped off the stage of an air-conditionless club. Instead, he’s trapped in a stuffy, sawdust-clouded woodshop cutting rafters with a 24-inch reciprocating blade.

Unlike many pampered rock stars, Athon is spending the week building a pagoda for a nearby technical college. The life of a critically acclaimed metal musician ain’t all roses.

“On the bright side,” he says, “swinging a hammer in the Savannah summer means we don’t need to jog. Running around in a fancy pair of New Balance shoes would be a lot less strenuous than this.”

LEO spoke with Athon mere days after Black Tusk (a trio that includes guitarist Andrew Fidler and drummer James May) returned to the States. The band just concluded its first-ever European headlining tour, which kicked off in Sweden and culminated with a festival appearance in Tonsberg, Norway. The latter was, reports Athon, a calamity.

After driving through the night, they unloaded their gear, dragging it to the top of a mountain. A brick medieval tower with a black spire towered above, and, as soon as they took the stage, rain poured down. Everything flooded; electrical cords started to short. But the show had to go on. They draped plastic over their myriad guitar pedals and played against a torrent. On cue, they launched into the massive opening riff of their epic song “Embrace the Madness,” right as a bolt of lightning slammed into the mountain. Athon’s howling lyrics — Crash of lightning/summon rain/thrash the stage/into flames — took on additional significance.

“We managed to finish the song,” laughs Athon. “Then the stage manager escorted us off very quickly. He might’ve mumbled a prayer.”

Near-death experiences aside, 2012 has been the Year of the Tusk. The band, which formed in 2005 and released its fourth album, Set the Dial, on Relapse last year, is still high on the adrenaline of being handpicked by Metallica to play the Orion Fest in June. It’s not every day a metalhead musician gets the nod from his heroes.

“It’s cool as hell to say you’re hanging with someone you idolized as a kid,” says Athon, giddiness in his voice. “We still walk around shouting Metallica lyrics at each other for no reason.”

But Black Tusk’s growing popularity and success is double-edged. Being under the radar means the band has kept its collective head. No one tells them to do something they don’t want to do.

“Yet you always feel you want more,” admits Athon. “It gets rough keeping it real all the time. Sometimes you feel like handing over control to others and letting them pimp you for a while. But I like having our punk-rock ethics; it keeps us honest.”

That honesty is evident in a recently released split 7” with fellow Savannah band Dead Yet? on a Savannah indie label.

“Dead Yet? chose one of our songs to cover, and we chose one of theirs, plus an original,” explains Athon. “We always try something different. But whatever we do is going to sound like Black Tusk. We’re only fine-tuning this machine we created.”

“But our van is better now. Between that and bourbon, we have it worked out.”

Black Tusk with Ohlm, All Dead, and Farewell Soyuz