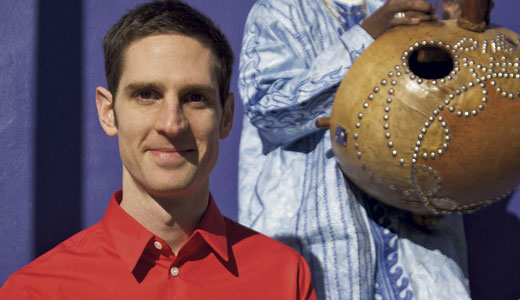 Canadian banjo artist Jayme Stone has traveled to Africa, learning from and playing with musicians there while tracing the roots of the banjo to its African origins. Yacouba Sissoko is a kora player from the Malian Griot tradition. The kora is a 21-string instrument, frequently described as similar to a harp.

Stone first brought his Africa to Appalachia project to Louisville in March 2010, performing for an enthusiastic audience at the Bomhard Theater. A concert scheduled for Oct. 26 at the Clifton Center was canceled Tuesday “due to unforseen circumstances.” A new date has not yet been announced.

LEO spoke to Stone between back-to-back tours with ensembles ranging from folk to classical.

LEO: Do you have trouble keeping track or changing modes when you’re going from a classical quartet to something like the Africa to Appalachia project?

Jayme Stone: As long as I have a little bit of time to prepare in between, and get my head and fingers inside a new repertoire, then I’m fine. I’ll have a few days before we start up the Africa to Appalachia repertoire, so I’ll definitely have to dig back in. I’ve mostly been playing other music and collaborating with different people, so it will be kind of a reunion tour of sorts, with Yacouba and the other musicians. I’m looking forward to it, and I’ll have to get back into the mode of playing that style of music, for sure.

LEO: Will it be the same players who were with you before?

JS: Actually, I have a different ensemble this time. We’re going to be a quartet, with percussionist, drummer, and kamale ngoni player Tim Keiper, who you might have heard playing with Vieux Farka Touré, Ali Farka Touré’s son. He’s an amazing and versatile musician, living in New York, playing all kinds of music. He got hip to music from Mali and traveled over there and spent some time living there and actually played with a lot of West Africans. We’re really excited to get to work with him.

We’re also going to have a fiddle player named Rob Hecht, who was on tour with me all summer and plays an amazing five-string fiddle with incredible rhythmic intensity. I met him at a jam session in New York, and the moment I heard him play, I felt a really happening chemistry. A couple of tours later, I had the opportunity to play with him. He hasn’t played much West African music, but he’s rhythmically inventive, so I’m extremely excited see how he fits with all the great stuff Yacouba does.

LEO: Have you played with Yacouba since your 2010 tour?

JS: We haven’t done anything for over a year, so I’m excited to revisit it all. I don’t have plans for another Africa to Appalachia record. We certainly will be playing new material; I’ve written some new music, and we’re definitely going to keep evolving some of the things from the record. We have a very collaborative spirit, so I’ll probably bring in some ideas and sketches of tunes, and we’ll make them our own. I love to give people a lot of room and find a way to have them participate in the art of creating music. Yacouba will also bring in some music, and we will draw from the music of West Africa.

LEO: With all your formats, you don’t let yourself get stale, do you?

JS: I don’t, I don’t really know how to do that. There’s so much music that I’m madly in love with, and I get turned on to new things all the time. I have an insatiable appetite for new sounds, and I also really enjoy working with different people and in different settings.

The way I make music with Yacouba is very organic, and we very much use our ears and intuition. It’s also really fascinating to work off the page, work with the level of detail and nuance that I get to with the string quartet. And then I love working with improvisers and folk musicians. So I feel like I have these different threads in my own musical interest to enjoy playing with people who excel in all these things.