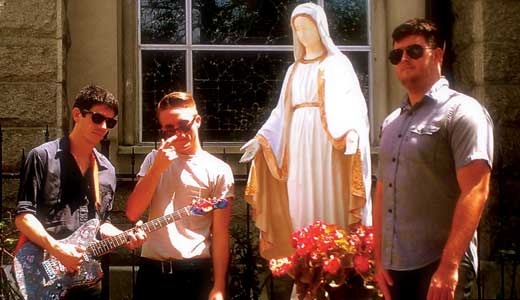 For its third year, the annual Cropped Out festival of underground music and culture has added some star power. Well, if you consider Jandek, Neil Hamburger, Lil B, Eugene Chadbourne, Chain and the Gang, David Liebe Hart, or R. Stevie Moore to be “stars.”

And they are indeed stars to a small but fiercely dedicated group of fans of new sounds and ideas. That group includes festival founders James Ardery and Ryan Davis, musicians and concert bookers who have been friends since second grade in Louisville. The pair decided to apply their collective knowledge — earned here, on the road, and through Ardery’s time in Brooklyn — toward organizing their dream line-up.

“I can’t say how surprised I am that we got all these people on the same bill,” Ardery says.

It’s an unruly collection of noise guitarists, young punks and weird old folk, one especially unique rapper, and a popular anti-comedian. And much more.

They named their operation to represent the bands, and the fans, “to turn heads toward the talents of those often omitted, overlooked, or cropped out of ‘the big picture,’” as their manifesto states.

“The whole idea with Cropped Out isn’t simply to just weird people out. That’s definitely part of the aesthetic, and part of the fun,” Davis says.

They see it as a chance to introduce music fans to some new favorites — acts you might love, who haven’t yet had the same degree of promotion or distribution as some of your other favorites. It’s a diverse line-up, and while not all are easy to digest, there’s something for many.

Cropped Out uses Facebook, Twitter and other such sites for promotion, but also goes door-to-door, passing out flyers and explaining themselves to interested parties. They’ve sold the idea to bands and fans they’ve met in other cities while on tour, and even popped up with a table at NuLu’s Flea Off Market.

The duo hope to continue establishing Cropped Out as “a brand name that people can trust,” Davis notes, “so that when someone buys a ticket for one of our shows, he or she may not necessarily be familiar with the music, but is just as excited about rolling the dice and embracing something both fresh and foreign.”

Both agree that Merchandise, a dream-pop band from Tampa, and Guerilla Toss, a punky yet oddly funky band from Boston, are two of the bands to seek out this weekend.

When asked how they explain the focus of the festival to those otherwise unfamiliar with the acts featured, Ardery replies, “I’ve actually thought long and hard about this. I think that when people describe the festival as ‘weird,’ that’s true and accurate. But I think the festival embodies being a platform for people to hear bands they’ve never heard of before.”

Davis says, “While most festivals book bigger-name bands in hopes of catering to crowds of people with a preconceived desire to see them, we tend to book musicians whom a lot of people probably don’t know, but to whom we think more people should be exposed.”

Ardery sees people look at their fliers and turn away from “a bunch of names they don’t recognize.” He is confident, though, that word of mouth will continue to deliver more converts to their flock. “Typically, what I hear is ‘There were a lot of bands I didn’t know about … but the show was really good.’”