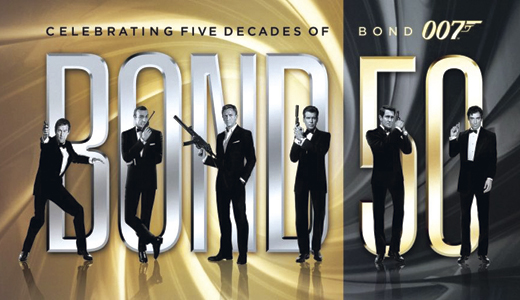 All 22 James Bond films on Blu-ray — nine of them for the first time — in a single collector’s edition. One movie per disc plus one additional disc of all-new bonus material, all honoring the 50th anniversary of the first Bond movie, 1962’s “Dr. No.” To call this the video event of the year is an understatement, and it’s made all the more amazing because of the extensive HD restorations performed. In particular: “You Only Live Twice,” which suffered from graininess and loss of color in previous releases, is now spectacular. A steal at any price.

Yes, this features an inventive and noisy destruction of NYC, but that’s not what makes it so outstanding: It’s the interaction between the players, or as the late Gene Roddenberry once said of “Star Trek,” “Sci-fi isn’t about science, it’s about people. The best stories are always about people.” And with a cast that includes too many egos to name here — much less their superhero counterparts — there are a lot of great personalities to enjoy. The real secret to the success of this wildly entertaining comic-book-come-to-life, however, is writer/director Josh “Firefly” Whedon, who has done the impossible: He lived up to everyone’s expectations. What more could you possibly want to know?

Our favorite twisted black comedy, now on a Criterion Blu-ray release. Paul Bartel and the amazing Mary Woronov are Paul and Mary Bland, a quiet couple who dream of someday owning their own restaurant. They find a source of funding by luring perverts into their apartment, banging them with a frying pan, and stealing their wallets. But when burglar Raoul catches them, he takes over the operation. So what does the title mean? Heh, heh; trust us, this one is worth checking out.

This Danish comedy, based on a six-episode TV show, has become something of an international hit. A pair of idiotic, out-of-control dudes combat adult life through roguish debauchery and constant mayhem. Then, to prove they’re finally fatherhood-ready, one kidnaps the nephew of his pregnant girlfriend while the other decides to “live the dream” — and visits a world-famous whorehouse! Yeah, it’s raunchy and perverse … and one of the funniest things we ever saw. Highly recommended.

A savage former assassin, unable to bear the grief of his wife’s murder, pushes a lethal baby carriage across the mountains of Japan to protect his only son from the hordes of evil-doers, shoguns, ninjas and otherworldly horrors who accost them. If that sounds like “Shogun Assassin,” you’re close: That name is normally associated with the movie version of the first two TV episodes, but this contains all six, including “White Heaven in Hell,” the snowbound final battle of the series. Now available on Blu-ray.

While everyone knows about the excellent Ray Harryhausen version of this classic Jules Verne tale, few are aware of this historic 15-chapter serial. And it is surprisingly faithful to the book — despite adding an alien character from the planet Mercury! — especially when you consider it was produced by Sam Katzman, the man who single-handedly created the entire teen drive-in schlock craze of the ’50s and ’60s. Fun stuff.

RESCUE ME: THE COMPLETE SERIES

When we first heard that Dennis Leary was creating a series for FX about firefighters, we were skeptical. But the man pulled it off; an uncompromising comedy-drama that capitalizes on Leary’s native abrasiveness and intelligence. He plays a troubled, unrepentant, misanthropic NYC firefighter whose life is a total disaster. But he is also dedicated to his family and friends, even if his actions always seem self-centered and cruel. It’s 26 discs of the best, most original show on cable.

Just as screwy as it sounds: Nubile young women compete in a Japanese Web show that requires loss of an article of clothing with each lost round of Mahjong. And what happens when they have nothing left to lose? Why, the punishment begins, of course. A silly ’70s-style teaser with a warped sense of humor.

What the Brits refer to as “cheeky.” A nicely naughty horror comedy with no actual stripping but some great lines (“She had such great legs … have you found the other one?”), crappy special effects, and some cool cameos. Obviously a case of inspiration over budget, but we liked it.

To call this an “ecological documentary” is to miss what an amazing piece of filmmaking it is. Martin Scorsese brings together some of the world’s greatest minds — Jane Goodall, Stephen Hawking, David Suzuki and a dozen more — to consider the findings of Ronald Wright (“A Short History of Progress”), that demonstrate how “progress” and technology have trapped and destroyed all of mankind’s great civilizations of the past. Can we learn from them and save our own future?! Simply mind-blowing.

A treatise on abusive relationships from Argentina that just happens to focus on a pair of homosexual men. The older man, who is obsessed with guns, becomes enraged when he finds his promiscuous young squeeze cavorting with another, leading to violence, murder and rough sex. A movie with a message, but not for everyone.

A nicely chosen set of six odd movies from the ’50s and ’60s starring the likes of Beverly Garland, Eddie Dugan and Richard Coogan. Includes the long-missing hoochy-kooochy-whodunit “Girl on the Run”; “The Naked Road,” in which a woman is left as collateral for a speeding ticket, then rescued to become a potential sex-slave; and an amnesiac preacher who can heal the sick becomes a broken man when blackmailed by his ex-girlfriend in “The Seventh Commandment.” We love crap like this.