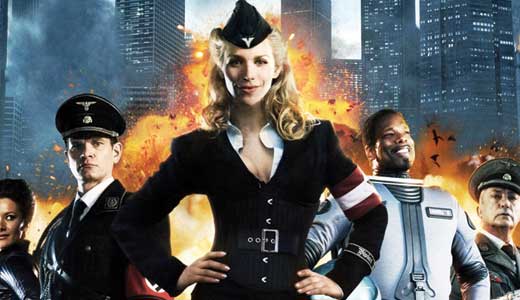 Man, what a hoot! This indie Euro sci-fier has everything a movie geek could want. Leggy Nazi babes? Check! Secret moon bases? Check. Horror vets? Check! It seems that the Nazis fled to the dark side of the moon once they saw that they were going to lose the war. There they built massive works, including an armada of flying saucers, and now plan to re-invade Earth from the skies! With lots of scary German hotties, a female U.S. president, and the inimitable Udo Kier as Wolfgang Kortzfleisch. You gotta check this out.

The heirs of Uncle Walt pull out all the stops for this Diamond Edition release of the world’s first full-length animated feature. You know the tale by heart, of course, so we’ll be clever mice and just point out that there are two-disc and three-disc Blu-ray/DVD combos, plus one truly awesome six-disc set that includes both sequels (“Cinderella II: Dreams Come True” and “Cinderella III: Twist in Time”), extra bonus goodies and a too-cute case shaped like a 3-D jewelry box! Still sitting there? Repeat after us: “Bibbidi-Bobbidi-Booooo, Bibbidi-Bobbidi-Boo …” (Oh, and here’s our favorite “Cinderella” joke: What did the Fairy Godmother say at the Walmart photo counter? “Some day my prinnnts will come …” Sorry.)

ELVIS: THE KING AND HIS MUSIC

A great doc on Elvis Presley from the people who witnessed it all: his longtime backup musicians. Legendary guitarist Scotty Moore, drummer DJ Fontana, and gospel group The Jordanaires discuss how such hits as “Love Me Tender,” “Hound Dog” and “Heartbreak Hotel” came to be — including the never-before-revealed events that inspired them.

Absolutely the best doc on the subject of food and health we’ve ever seen. A serious look — with some nice comic moments courtesy of Jamie Oliver and friends — at the flagrant conspiracy between the diet, weight loss and food industries, manipulating us into being the fattest, sickest modern nation on the planet. Best of all, it shows very simple things you can do to have more fun, get healthy and stay that way! Wonderful.

British police dramas make ours seem childish, and there’s no better example of that that this series from Patrick Harbinson, producer of “24” and “Law & Order: SVU.” It’s an unflinching look at the man with the worst job on the planet: a master negotiator who inserts himself into the danger whenever a kidnapping occurs, anywhere in the world, doing whatever it takes to bring the victims home. With a stellar cast and savagely sharp writing, often inspired by real events, this may be the most intense show we’ve ever seen. Excellent.

We like this quirky comedy, but we wish they would focus more on star Zooey Deschanel and less on the rest of the cast. She’s by far the best thing here: a beautiful, childlike woman who may have outgrown her waifish wardrobe but keeps her unflinching optimism and somewhat spasmodic body language. It wasn’t until very late in the season that co-stars Lamorne Morris, Jake Johnson, Max Greenfield and Hannah Simone really became interesting. We’re looking forward to Season 2.

Wow! Why hasn’t everyone heard of this film? Sigourney Weaver (!) and Cillian Murphy (!) are full-time paranormal-debunking scientists (he with girlfriend Elizabeth Olsen (!!) in tow), who come face to face with disturbed psychic Robert De Niro (!!!). And, man!, does it start off strong: a nice panoply of spookidoins that would make any Ghostbuster wet himself. Then it all goes down the tubes as writer/director Rodrigo Cortés gets all arty. Still a fun ride, all in all.

SOUND OF MY VOICE

A big hit at the 2011 Sundance Festival, this microbudget indie will knock your socks off. Britt Marling is the intoxicatingly beautiful leader of a desert cult. She says she comes from the future, a claim that attracts a pair of lovers/investigative reporters who slowly discover just how dangerous she truly is. As good a thriller as you’ll ever see; from the people who brought you “Another Earth.” Do not miss this film for any reason.

Michelle Yeoh shines as Aung San Suu Kyi in this biodrama of the Burmese democracy advocate who has become a lightning rod for social reform around the world. David Thewlis plays her husband, writer Michael Aris, who suffered their long isolation and constant danger in support of her cause until his death in 1999 of prostate cancer, unable to visit his wife as she was under house arrest in Burma. A surprisingly quiet film, given the topic, that throbs with the power of Kyi’s message; directed by Luc Besson.

It’s a shame that American viewers have never had the chance to see this spry romantic comedy about a pair of British police detectives: It reminds us of “Moonlighting” — no small praise! Toby Stephens plays the oversexed male half of the team; Lucy Punch (and, in the second season, Miranda Raison) assumes the more centered distaff role. Together they are an unlikely pair who nonetheless catch bad guys whilst verbally dueling away the growing sexual tension. One helluvalotta fun.