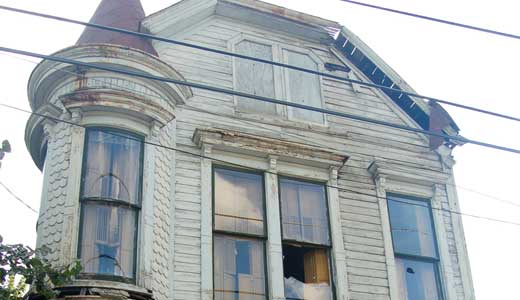 Even in its anemic, brittle state, 2000 Portland Ave. stands with dignified elegance. Built in 1890, intricate gingerbread molding frames broken windows. Boards cover the front entrance, though a sign above the doors remains intact. It reads in bold, dark letters: “TOILET ARTICLES,” a nod to the building’s past as a neighborhood pharmacy. Scabs of paint flake away. Adorned with fish-scale shingles, the turret’s underside looks splintered, like pesky hangnails.

“It needs a lot of tender loving care, that’s for sure,” says Gary Watrous, a longtime Portland resident and local architect. He stands near where a collapsed chimney has caused an exterior wall’s scoliosis. The wood bows, creating a space now filled with empty bottles and trash.

For about a decade, the building has sat vacant, collecting more than 70 citations from the city: windows in need of repair, trash on site, cracked-loose plaster. The list goes on.

Watrous steps toward the back of the building, crunching shattered glass on the sidewalk that’s now blocked by orange mesh fencing. After the chimney crumbled, inspectors deemed the site a possible hazard to passersby.

For years, Watrous and his neighborhood association Portland Now Inc. have hoped for the restoration of this two-story Queen Anne Victorian-style home, located near an important neighborhood gateway — the 22nd Street exit of Interstate 64.

With highway traffic roaring behind him, Watrous says rehabbing this historic structure, visible from I-64, would bolster other efforts under way to revitalize this area of west Louisville packed with nostalgic, unique structures.

But 2000 Portland Ave.’s future is uncertain. It’s on the city’s demolition list. Concurrently, Metro government is trying to foreclose on the property, perhaps creating an opportunity for a skilled rehabber to buy the dilapidated structure that’s languished for years due to complex ownership issues and its historic significance.

“It’s kind of a race to see who gets approved first,” says Mary McGuire, who leads Metro’s Vacant and Abandoned Property Initiative. “So we’re pursuing both foreclosure on it and demolition on it. The reason being something needs to be done.”

Should the city successfully foreclose, putting the home up for auction, Watrous says his neighborhood organization, unfortunately, doesn’t have the manpower or money to buy and fix the building, a project he estimates would cost well over $100,000.

Under a clear, late-summer sky, he tells LEO the long saga of 2000 Portland Ave. reminds him of a fairytale.

“It’s not unlike ‘Snow White,’ in a way. And the question is, does she keep sleeping and eventually die or does a prince come and rescue her?” he says. “It needs a rescuer.”

At just over 120 years old, only two individuals have held the title to 2000 Portland Ave. E.C. Schweitzer is listed as the first owner. A 2007 article in The Courier-Journal stated Schweitzer Pharmacy operated in the 4,000-square-foot house until 1924.

Records from the Property Valuation Administrator’s office show in December of that year, Harry Katzman, a pharmacy student, bought the building. He operated a pharmacy for more than 25 years until his death in 1952.

His family, who lived on the second floor, tried to keep the pharmacy alive, but eventually one of Katzman’s daughters, Harriet Grace, assumed control of the business, turning it into more of a corner market stocked with candy, magazines and trinkets. That lasted until the 1980s.

According to the Jefferson County Attorney’s Office, following Harry Katzman’s death, the property was transferred into his wife’s name. (For some reason that doesn’t show up in PVA records.) When she died, she willed the property to her three children in equal parts.

However, the required legal documentation, known as an affidavit of descent, was never filed. Therefore, the title remained in Harry Katzman’s name.

It’s a scenario that’s all too common.

“People will live in a house and they’ll say, ‘Well, it was my mom’s house and I’m living in it.’ Well, that doesn’t mean it’s yours,” McGuire says. “That goes against what most people think on the street.”

It can cause great headaches for Metro should that property become vacant and heirs die. Who’s now responsible? Who must the city notify if they want to foreclose?

Harriet Grace Katzman lived in the home until the city issued an order to vacate due to safety concerns. She still paid taxes on the property and tried to keep up with violations over the last decade. The codes and regulations file on 2000 Portland Ave. holds several hand-written notes by the elderly woman explaining to the city that her limited finances and age prevent her from keeping up with all necessary repairs.

McGuire tells LEO she’s heard stories of the woman in her 80s taking the bus to the house and trying to amend violations herself.

“It’s a big project for anybody,” McGuire says. “And she’s in her (80s) trying to take care of the stuff by hand. And it was just really beyond her.”

With 20 outstanding violations in 2006, Metro’s Vacant Property Review Commission deemed the home blighted a year later, making it available for spot condemnation, in other words a means for the city to acquire the property. The next step in that process would’ve been for Metro Council to approve possession of the land by agreeing to file a lawsuit. For whatever reason, (perhaps the city realized how costly refurbishing this property would be) that never happened.

Now Metro is pursuing two different paths. McGuire has put in a request to foreclose on the property as part of a new $125,000 pilot project that aims to foreclose on 100 problematic vacant properties this fiscal year. (Katzman also owned a structure on Ormsby Avenue that the city hopes to foreclose on.)

Legally, the city can file for foreclosure because 2000 Portland Ave. has racked up $12,000 in fines, fees and liens. (Though any potential heirs must be notified, a process McGuire says isn’t easy, as many have relocated outside Louisville.) If the property winds up going to sale through the Jefferson County Circuit Court Commissioner’s Office, McGuire hopes an investor will step forward and opt to rehab. Though, she admits, it may pose too much of a challenge. That individual could choose to raze it instead.

“I love that house, but I just don’t know,” McGuire says. “It reaches the point where even putting in as much money as you could, you don’t know if you could save it.”

(While a commissioner’s deed would wipe out the outstanding fines on the property, the purchaser would likely be responsible for the more than $5,000 in outstanding property taxes currently in the hands of a third-party private investor.)

First the city must receive approval from Kentucky’s State Historic Preservation Office. A letter dated June of this year from that office to Metro’s demolition division requested more information. The letter states this property is “eligible for listing in the National Register of Historic Places.” At the same time, it reads, “We acknowledge that the rehabilitation costs have reached a level that demolition could be considered.”

Mariane Zickuhr, executive director of Preservation Louisville Inc., feels the city should do more to strategically save properties like 2000 Portland Ave., once a corner business. If Metro truly wants walkable, thriving neighborhoods, she says, corner stores play an “integral” role. Vacant lots do not.

On a personal note, Zickuhr, who says she grew up near the building, “adores” it. Just the thought of demolition deeply frustrates her.

“It would be another loss. Portland does not need any more losses,” she says. “It’s the city’s oldest neighborhood. It deserves more respect.”