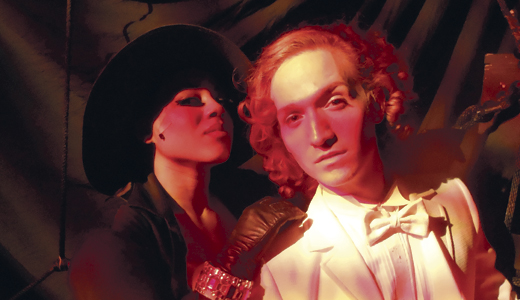 ‘Kiss of the Spider Woman’
Presented by Pandora Productions. Book by Terrence McNally, music by John Kander and lyrics by Fred Ebb. Based on the novel by Manuel Puig. Directed by Michael J. Drury. Continues through Sept. 22 at the Henry Clay. For tickets or more info, call 216-5502 or go to pandoraprods.org.

Luis Molina adores his favorite movie star in every role she’s ever played onscreen. Except one. A spider woman with a fatal kiss chills him to the bone, though he can’t explain why. He can see her slinking down the prison corridors, where he is confined for deviant behavior, alongside a cellmate who is less than eager for his friendship.

The script of this Tony award-winning musical could not have fallen into better hands than Pandora’s, whose rendition is moving and dazzling. As usual, director Michael J. Drury and his technical crew are meticulous in their work, paying careful attention to every detail from the moment the audience enters the theater. The set, which makes effective use of angles and levels, is somehow beautiful while still fittingly resembling a gloomy, overcrowded prison, and the two inmates slumping around their cells while the audience trickles in carries us right in to their long, lonely, hopeless days.

Though the principles maintain center stage, the ensemble manages not to get lost in the background when they’re not singing the chorus parts, which they do beautifully. Each actor is committed to the moment at all times, and it was clear they had done individual character work with their inmate roles. They never stole focus, but I found myself glancing up often to see what they were up to.

As Valentin, Molina’s cellmate, Mason Stewart reveals a man who is passionate about his cause but tries to swallow his pain and stay strong, though it is especially challenging for him in his current circumstances. At some points, I felt we may have been lacking a little from Stewart emotionally — until he started singing. My god, can this man sing, and his character’s deepest feelings and life’s struggle flooded the room with his song, especially in “Over the Wall” and “The Day After That.” His shift in his feelings for Molina, as well as his internal struggle with those and his political cause, are strong.

Neill Robertson is enchanting as Molina, a deeply complex but open and honest character, portrayed with power and grace that invites us right in as soon as he steps on stage. The chemistry in Molina and Valentine’s rocky relationship is intriguing and tangible, and these two actors complement one another nicely. Molina’s relationship with his mother (Carol Tyree Williams) was also touching, causing the audience to fall apart during the heart-wrenching “You Could Never Shame Me.”

Finally, as Aurora, the Spider Woman herself, Janelle-Renee Hunnicutt is the embodiment of elegance, the heart of Molina’s silver screen fantasies that get him through each lonesome day. Her darkly spectacular musical numbers and backup dancers frame the show, giving welcome relief from the cold prison walls. She may have had a bad stage mic Friday night — I had trouble hearing and understanding her at some points, and she seemed a bit tired, though she remained poised and glamorous. All in all, with brilliant theatrical and musical work, gorgeous costumes and a fabulous live orchestra, this production is a masterpiece.