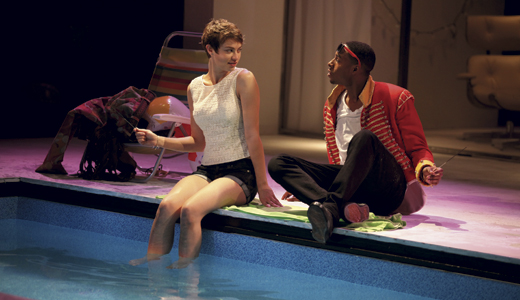 ‘Romeo and Juliet’
Directed by Tony Speciale. A production by Actors Theatre of Louisville. Continues through Sept. 26. For tickets, go to actorstheatre.org or call 584-1205.

The second half of director Tony Speciale’s superb new production of “Romeo and Juliet” opens on a scene of sublime innocence. On a swing suspended by ropes from the lofty ceiling of the Pamela Brown Auditorium, Juliet (Elvy Yost) glides to and fro as she yearns for the night to come — when she and Romeo will consummate their secret marriage — and envisions a long, happy life with her lover and husband.

It’s one of the richest soliloquies in the Shakespearean canon, one that proposes a profound dramatic irony when Juliet imagines Romeo’s death — a death she expects will occur far in the future: “… and when he shall die, take him and cut him out in little stars, and he will make the face of heaven so fine that all the world will be in love with night.”

Placing Juliet on a swing is a brilliant stroke that firmly establishes her as a girl on the delicate edge of womanhood, but it’s just one of many brilliant touches Speciale brings to bear in a production that marks a new era of leadership at ATL, where Les Waters has taken the helm as the company’s new artistic director.

In fact, Speciale’s entire production crew has done a magnificent job of situating the production in an affluent California suburb, where teens splash in a swimming pool, play video games, and revel in a culture where the social order is fraying under a smirking disregard for tradition and respect. Scenic designer Daniel Zimmerman creates a sleek stylish world (and a stunning fishbowl-like ballroom that houses some of the play’s most stunning and witty visuals). Costume designer Michael Krass garbs the players in vivid colors, skimpy swimsuits, baseball caps, fashionable dresses (and, bathrobes that might have come straight from Hugh Hefner’s closet). Christian Frederickson’s sound design and Philip Allgeier’s innovative use of visual media (including a remarkable use of handheld video cameras) are notable not for their novelty, but for the ways in which they enhance and comment on the action. And the contributions of dialect coach Rocco Dal Vera, fight director Adam Rihacek, and movement director George de La Pena play an essential role in shaping a perfectly realized, inspiring production.

But even if this production were played on a bare stage, the performances Speciale has elicited from his players would define this as a masterful production. It sounds as if every beat of every line has been scrutinized so as to clarify and emphasize Shakespeare’s meaning — and often Speciale reveals that meaning by inflecting it with rhythms and gestures (sometimes vulgar, sometimes sexy, sometimes intimate, never gratuitous) drawn from the street. Every performance is impressive. Romeo (Grantham Coleman) and Juliet are eloquent exemplars of love and grief. Nate Miller delivers a wonderful Mercutio, playfully mimicking all manner of street speech. Jordan Dean is a simmering Tybalt; the scene where he and his uncle, Lord Capulet (Bruce McKenzie), go literally head to head with one another is a chilling sign of the brutality that lurks under the sophisticated veneer of the Capulet family — a brutality that marks Amy Morse’s brittle interpretation of Lady Capulet, though it fails to intimidate Juliet’s stalwart (and exquisitely comic) Nurse (Myra Lucretia Taylor).

Lady Montague has few lines, but Yvette Gainer delivers them with virtuosic gusto. And in the opening scene — where the lines of battle between the Houses of Montague and Capulet are drawn — Michael Zuccola’s Sampson bites his thumb with a provocative, comic glee that would surely have delighted the groundlings at Shakespeare’s Globe.