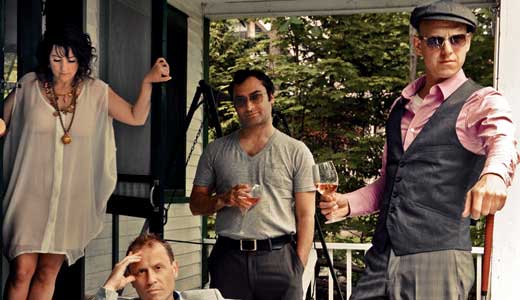 The North, the new album from the Canadian band Stars, offers quite a change from 2010’s Five Ghosts. FG was a compelling disc that required multiple listens for full appreciation. Now they’ve got a set that often jumps out of the speakers.

The themes behind the songs aren’t so different: The last album declared “I Died So I Could Haunt You”; now, there’s the query “Do You Want to Die Together?” Though Stars mine a depth of intimacy somewhat reminiscent of The Smiths, the younger act wisely incorporate musical lessons learned from those intervening years and enjoy the advantage of a great singer from each gender. At their best — which is often on The North — Stars offer an indie-rock cabaret that owes much to classic soul, but their most obvious predecessors and influences are heard in the most danceable tracks that update ’80s synth-pop.

LEO recently spoke with singer Amy Millan, who offered an assessment of how the new material came about after the end of touring for Five Ghosts.

“When you go in and you write your next song, it’s always counter to the song you were just working on,” she says. “And when you make a record, then you tour that record for, like, two years — you live inside it … And when you come off the road, after having that experience, you ask yourself, ‘What would make me the most happy?’”

The contrast between one record and the next was exacerbated because “a lot of crazy shit happened” on the way to developing the 2010 album — for example, the death of singer Torquil Campbell’s father. Milan notes, “It was a really intense time for the band.” Now, The North has come about from “a fresh desire to have a little fun.”

Circumstances were also happier as Millan and bassist Evan Cranley were about to become parents as the new recording sessions began. The singer cites the music for “The Loose Ends Will Make Knots.” “That is from our very first writing session for the new album. We went to a cabin in the Laurentians,” says Millan. “It was the dead of winter, it was January … I was eight months pregnant. And we wrote that and we all came into the room and we had all our recording equipment there,” and so the instrumental track on the record was recorded right there in the forest.

Millan clearly enjoyed the recent recording sessions, which involved multiple locations. “You have to change scenery, or else you get stale.” The final sessions took place at “a beautiful studio built in 1948 called ‘Studio RCA Victor.’ It’s all wood convex panels — ceiling to floor, and absolutely gorgeous.”

Millan’s infant daughter was brought along as the vocals were wrapped up. “She wasn’t crawling yet, so I just put her on a blanket up front. If you pay close attention, you might hear a couple of squawks from a little person.”

One of the keys to lasting success for Stars is the interplay of the two vocalists. Millan reveals a key to this alchemy while discussing the standout track “Hold On When You Get Love and Let Go When You Give It.”

Campbell had developed “a distinct verse and then this incredible music explosion … and Torq just said to me, ‘Look, I don’t have anything (lyrically) for that. I feel really great about my verses, so if you just want to come up with something (on the chorus), see what you’ve got.’ … I think, for the next record, we should try as much as possible to be working off each other lyrically and vocally — because I think that’s the strongest material.”

When asked how the band whips up such sophisticated results that are often, at heart, synth-pop, Millan’s feelings are, “Evan and (keyboardist) Chris (Seligman) were classically trained. I think it’s that aesthetic that they bring to these cold instruments. They’re able to bring warmth and soul to an essentially detached keyboard. They have this ability because, I think in some ways, classical music is also like that — it’s very calculated, but there’s something very warm about it. It’s their touch — to be able to find these toys and turn them into something very present and current … and delicious.”