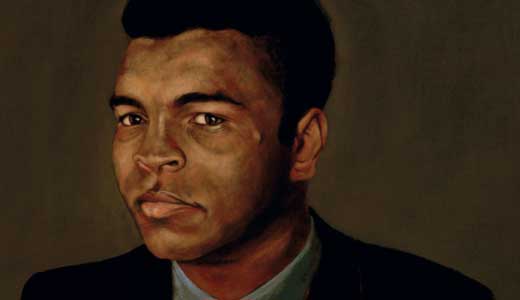 How do you research a man who is dead and didn’t leave much behind — other than a worldwide fellowship organization known as Alcoholics Anonymous? It took documentary filmmakers Kevin Hanlon and Dan Carracino eight years to complete “Bill W.,” an in-depth look at AA co-founder Bill Wilson. Time magazine named Wilson one of the 100 Heroes and Icons of the 20th Century, but little is known about this reluctant hero, who struggled with alcoholism for 17 years and helped come up with AA’s 12-step program that continues to be implemented in groups across the globe. “Bill Wilson may be the most famous person that almost no one has ever heard of,” the directors say. “Over time, Wilson became a firm believer in the spiritual value of anonymity.” —Sara Havens

“They’re the perfect loving family, so adoring. And I love them every day of every week.” Bipolar housewife Diana opens “Next to Normal” with these optimistic lines. What follows — “So my son’s a little shit, my husband’s boring, and my daughter, though a genius, is a freak.” — is the first sign of the emotional rollercoaster to come, as Diana and her family deal with the ups and downs of her manic depression and struggle for normalcy, or something next to it. Winner of the 2010 Pulitzer Prize for drama, “Next to Normal” features the poetic lyrics and lush rock music of Tom Kitt and Brian Yorkey. At times tongue-in-cheek (in one number, the cast rattles off a list of anti-depressants to the tune of “My Favorite Things”), Kitt and Yorkey are unflinching in their portrayal of mental illness in suburban America. —Jennifer Harlan

I bet they also found a time machine underneath Whiskey Row but aren’t telling us. I know someone’s hiding one somewhere, but we’ve all seen the movies and read the books — time travel can get pretty messy, so we should probably keep it fictional for now. Le Petomane Theatre Ensemble’s season opener features four travelers who are zipping through time — like, all of time, from the prehistoric to the future. In this completely original comedy, they’ll sing, dance, make some stops and maybe punch each other a few times. You know, long trips with others can get exhausting and tense. As always, this award-winning local troupe promises to take the audience for a ride with lots “deeply sneaky things” … like what? Only time will tell. —Jane Mattingly

Author Frank Bill recently told LEO that he doesn’t like to have his work labeled. (“If it’s a good book, it’s a good book.”) So let’s just call his portrayals of the disturbed and desperate exciting — as many have. Whether you find excitement in how he draws a hidden America or you just enjoy stories that aren’t afraid to get as gritty and extreme as necessary, Bill brings the goods. Last year’s story collection “Crimes in Southern Indiana” got the man noticed. Now the Corydon resident is working with his New York publisher on last steps toward early-2013 release of his novel “Donnybrook.” Asked what he’ll read as part of his appearance Friday at Second Story Books, he’ll go no further than to suggest “A piece of ‘Donnybrook’ — but I have other material.” —T.E. Lyons

For a while there, we thought Nashville might have been lost forever to corporate bubblegum country. But with recent alt-country resurgence (and Jack White’s country recordings and residency in Brentwood), true Nashville butt-kickin’ country is coming back with bands like The Electric Hearts. Jessica Breanne’s brash yet delightfully twangy vocals clearly make her the zealous granddaughter of singers like Bonnie Raitt and Loretta Lynn, as fuzzed-out guitars and drums swell and solo around her on tracks like “How Dare You” and “Be Mine.” The Electric Hearts will share the stage with local openers Silver Tongues, whose spaced-out yet driving tracks like “Ketchup” are featured on their full-length Black Kite. —Kelly Kettering

There are a few telltale signs that fall is imminent in Louisville: the stifling, sticky heat has subsided (kind of), college football is under way (blah), and there are lots of local art fairs on the horizon (woot woot!). Mellwood Art Center kicks off the artsy-craftsy season with its fourth annual September Art Fair. In addition to 165 indoor and outdoor artist booths peddling an array of wares, there will be live entertainment, a fresh fruit and vegetable stand, kids’ crafts, a high school and college artist venue, as well as tasty food and adult libations. To top it all off, the event is free, with plenty of parking, and there are indoor restrooms for the Port-O-Potty-averse. —Sarah Kelley

If the Melvins and Jesus Lizard have taught us anything, it’s that noisy music will always be an underground niche. Hex Machine understand this, and the music they create is the sort only sought out by adventurous freaks. Their new full-length album, Fixator, just dropped, and now they venture out of Richmond, Va., to see what the rest of the world thinks. One of the newer groups from Ryan Patterson and friends, openers Black God support and channel their combined talents into a gritty wrecking ball of punk fun — the likes of which many locals have yet to hear. Come for the noise, appreciate the chaos. —Austin Weber

The Kentucky Museum of Art and Craft hosts an experimental showcase this Patriot Day, courtesy of Cropped Out, Louisville’s magnet organization for booking the bizarre and overlooked. What a lovely evening this will be. California songstress Fielded, known off-stage as Lindsey Powell, emulates a less screechy Kate Bush with more elasticity in the throat to hold down her vocally driven, abrasive melodies lurking in the realm of post-pop. She currently tours with label mates Head/Head, who claim a new release on Catholic Tapes and are self-described as “gospel sci-fi.” Spend the intermissions in deep contemplation and check out KMAC’s current exhibition, “Storytelling as Craft.” Then return for some local avant-garde ponderings with Softcheque. There’s no better time to get experimental than 9/11 (thank you, William Basinski). —Lara Kinne

Michael Koerner makes no bones about his views on hot-button issues. The use of oil on canvas, sculpture and opposing color palettes helps the artist point out the obvious. A genius technique of Koerner allows the main focal point to burst off the canvas as background images are etched in the visual center of the brain, allowing the viewer to gain the (c)overt messages. “My satirical ideas and meticulous editorial technique have been refined in this series of work to such a high degree that seemingly unrelated issues are woven convincingly together inline,” he says. Koerner’s bold showing contrasts his last endeavor, the intimate “Cloud Conversations” that fused ink and oil, seen at Zephyr Gallery in 2009. —Allison Ray

‘Americans Who Tell the Truth’

In an election season thick with empty promises and carefully manicured rhetoric, here’s a breath of fresh air — “Americans Who Tell the Truth.” That’s the name of a new exhibit at the Muhammad Ali Center that just opened Labor Day weekend. Artist Robert Shetterly’s portraits of 40 Americans pay tribute to a vociferous, courageous bunch who have helped push social, economic and environmental causes. Louisville-based civil rights activist Anne Braden, as well as Kentuckians Wendell Berry and Muhammad Ali, all are featured in the exhibit. Each portrait includes a quote from the individual. So tune out the political white noise and enjoy genuine truth. —Anne Marshall