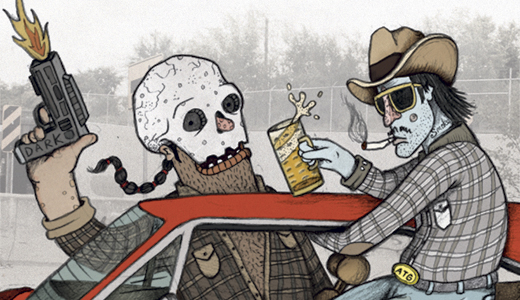 For the final Waterfront Wednesday of 2012, WFPK has recruited the grab-bag bill of hip L.A. rockers Everest, Chicago blues belter Shemekia Copeland, and local singer-songwriter Dave Moisan. Everest recently played the Forecastle Festival, and their local roots actually run much deeper: Co-leader Russ Pollard was born and raised here, played in Hedge, Calf-Fiends, and Out (as well as Sebadoh, after he was recruited by co-leader and then-resident Jason Loewenstein), and is married to a fellow Louisvillian and musician. Since their 2008 debut, they’ve toured with Neil Young (whose label releases their albums) and My Morning Jacket. And now, they share a stage with Copeland, whose work with Dr. John and Steve Cropper has helped her overshadow her famous father, Johnny, and earned her the title of the new “Queen of the Blues” formerly owned by Koko Taylor. —Peter Berkowitz

If horses went to high school, the Arabian might be that tall, elegant, good-at-everything type beloved by all. Even those meathead, Budweiser-swilling Clydesdales would appreciate an Arabian’s presence. This weekend, the popular horse breed shines at the Arabian Horse Celebration & Shopping Expo taking place at the Kentucky Expo Center. In addition to horse shows, stallions available for petting, and 500 vendors, the event will offer kids’ story time and lessons on how to create horse art. The nonprofit Arabian Horse Celebration team, based in Arizona, is behind this inaugural event. Part of the proceeds help support charities like the Angel Heart Farm, a therapeutic riding school for sick children. Oh, and admission is free! —Anne Marshall

Deke Dickerson and the Eccophonics

“I’m a West Virginia white boy,” croons Deke Dickerson in the song of the same name, a classic example of the rockabilly roots music he has been able to craft and perfect since the age of 13. Now also an accomplished studio engineer, producer and owner of Ecco-Fonic Records, Dickerson has successfully parlayed himself into many areas of the music business. However, year after year of being on the road clearly shows that a place on stage is his true calling, and the many ways in which he can swing his sound is a testament to his ability to perform shows with the likes of bands as different as Cake, Mike Ness, and the Reverend Horton Heat. Don’t pass up your own chance to clap, whistle and two-step along when he comes to Third Street Dive. —Kelly Kettering

The corner of Bardstown and Speed has become quite a hot spot, as The Bard’s Town has been graciously hosting local theater groups in their sharp little upstairs space all season. But their own house crew is back with the “Ten-Tucky Festival of Ten Minute Plays,” featuring brand new work from eight Kentucky playwrights. This year’s pieces bear particularly compelling titles, including “Gay Encounters of the Third Kind” by Andrew Epstein, “A Falling Piano with Your Name on It” by Patrick Wensink, “Aphrodite at the ER” by Nancy Gall-Clayton, and “Judging Quilts” by Trish Ayers. Among the directors, writers and actors are several Bard’s Town regulars and a few new faces. “We are thrilled to have so much talent in this state,” says Bard’s Town executive director Doug Schutte. “It’s worth celebrating!” —Jane Mattingly

So long, farewell, auf wiedersehen, adieu. It’s time to say goodbye to the Speed Art Museum as it heads into its renovation. The final weekend of events, dubbed “Lights Off/Future On,” has many ways for the museum and the public to say, “I’ll miss you.” On Friday, Sept. 21, start things off with the free public groundbreaking at 5:30 p.m. “Family Fun Happenings” is on Saturday, Sept. 22, from 10 a.m.-5 p.m. “Brown-Forman Art After Dark: Lights Off” is also on Saturday; they’re not kidding when they say lights off — it’s from 11 p.m.-2 a.m. The many activities include music by DJ Scratch and performances by the Le Petomane Theatre Ensemble. My favorite: bowling in the galleries. ($5 members, $15 non-members.) Sunday, Sept. 23, is the final public viewing day from noon to 5 p.m. —Jo Anne Triplett

Whether you call it NuLu or — if that’s too cutesy for you — simply East Market Street, there’s no disputing this once-blighted stretch has become a bustling epicenter of upscale art galleries, specialty stores and delectable local cuisine. The fourth annual NuLu Fest celebrates the neighborhood’s revitalization and features all things local, including micro-brews from the Louisville Beer Store, food and retail vendors, and live music ranging from singer/songwriter Leigh Ann Yost to experimental pop band Nerves Junior, who are headlining the event. And don’t miss the crowd-chosen Jake Parker Band, an act that proclaims, “We do originals, we do covers, we do it pantsless, we do it all.” But don’t worry, this is a family-friendly event, replete with a Kids’ Corner, so don’t be deterred by the threats of rock ’n’ rollers. —Sarah Kelley

This weekend is a fitting occasion to find fellow poetry lovers, or maybe even try on the guise for the first time — after all, it’s one of the rare occasions when poets are feted at the White House. That’s for the National Book Festival, but if you’re closer to home than to Washington, D.C., you should definitely look into the gathering of poets at A Reader’s Corner. It’s a varied lineup, including some engaging — even challenging — wildcards. Award-winner Jim McGarrah, author of “Running the Voodoo Down,” will be there, as will Tom Gibbs, Danny O’Bryan and Kathy Yocum. Two musical-minded figures round out the lineup: one is the always-interesting Ron Whitehead. But watch out for Brett Eugene Ralph, whose band plays this night at the Rudyard Kipling. —T.E. Lyons

Mark Parris is one of the few artists who isn’t intimidated by a medium, and his new show “Elephants” proves that, as he displays everything from digital compositions to oil paintings — all depicting, yep … elephants. Why elephants? “I don’t know,” the artist says. “I just like them, but I was shocked by how excited everyone I told about it got. I guess everybody loves an elephant.” Much like other artists in this town, Parris wears many hats, working as a musician, visual designer, as well as in paint and print; but this show will be all about the elephants, none of his other interests. The pieces will be on display at Revelry starting Saturday, with a launch party at 7 p.m. (Parris is set to DJ) and continues through Oct. 17. —Brent Owen

At 63, Englishman Nick Lowe has become many things: a highly influential songwriter/musician/producer, an accidental millionaire, a former member of Johnny Cash’s family, a dapper gent, and a righteous dude. Best known for his work with Elvis Costello (including writing “Peace, Love & Understanding”), Lowe has also written favorites like “When I Write the Book,” “Cruel to Be Kind,” “I Love the Sound of Breaking Glass,” and “So It Goes.” A former member of Brinsley Schwartz and Little Village, Lowe opened for Wilco’s most recent tour as a solo acoustic act, a performance he’ll be repeating here (the band also joined him for a recent live record). His records over the past two decades have reflected his joys and struggles as he ages, moving forward and acknowledging the passing of time. The superb Eleni Mandell opens. —Peter Berkowitz

Against the Grain Brewery

New beer alert! Against the Brain Brewery at Slugger Field, run by a bunch of good ol’ boys never meanin’ no harm, is releasing their newest concoction — Bo & Luke — on Tuesday with a “Dukes of Hazzard”-themed throw-down. The imperial smoked stout is an experimental beer created by ATG brewmaster Jerry Gnagy and Menno Oliver, the mastermind behind the De Molen Brewery in the Netherlands. The pair made the beer in June while Menno was in town. Bo & Luke is also aged in old Pappy Van Winkle bourbon barrels, giving it a proper Kentucky titty-twist. At Tuesday’s launch party, there will be an appearance by The General Lee car, a “Dukes” costume contest, and music by Hog Operation. Yeehaw! —Sara Havens

Louisville and Chicago share an underground connection through music. It has helped define our own eroded rock ’n’ roll while drawing more acts to Kentucky. White Mystery, a brother and sister guitar ’n’ drums duo from Chicago, will be refreshing our memory of that notion at Zanzabar. Fresh off the Amtrak with crunchy blues and immodest ’80s clothes, these redheads strive to rock on. They’re partnered with two doses of Louisville’s Southern-tinged hard rock: one, moderately heavy, Stagecoach Inferno, who wear fake 10-gallon hats. The more artful collective of Blackstrap Molasses will surely win you over with fiddle and angered vocal melodies. The tension will only increase with the average blood alcohol level. A night of camaraderie and intoxication awaits. —Lara Kinne

As Kentuckians, we take our bourbon seriously. We know the difference between bourbon and whiskey. We know the major distillers, and we know the best way to drink it is straight — don’t even think about adding Coke. If you want to know even more about our liquid cash crop, I recommend signing up for the Filson Bourbon Academy, an eight-hour class led by the Mr. Wizard of Bourbon, Mike Veach, who is in the Bourbon Hall of Fame. A mixture of history — the evolution from farmer distiller to modern distiller, Prohibition, etc. — and tastings, the Bourbon Academy will definitely give you enough knowledge to spout out at parties throughout the next year. Trust me, you won’t fall asleep in this class. Lunch is included in the admission. The deadline is Sept. 24. —Sara Havens