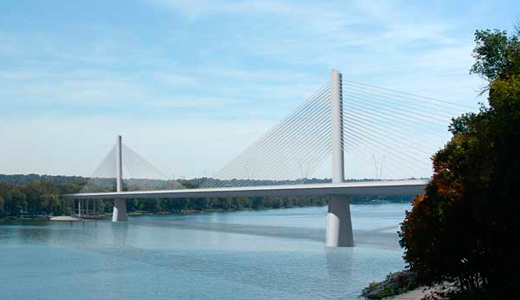 In June of last year, officials reduced the mega-project and subsequently updated plans to limit some of the potential adverse impacts at issue. But with last week’s filings, opponents sent a deafening message that their concerns remain unresolved.

Last Tuesday, the Coalition for the Advancement of Regional Transportation, a public-transit advocacy group, filed a lawsuit alleging 14 violations of federal laws including the Civil Rights Act of 1964, Federal-Aid Highways Act and Clean Water Act. And on Wednesday, local conservancy River Fields and the National Trust for Historic Preservation, the original plaintiffs that sued the Federal Highway Administration in September 2009, amended their complaint.

In a cartky.org post outlining its claims, CART President David Coyte accuses the defendants (the FHWA, Kentucky Transportation Cabinet and Indiana Department of Transportation) of “intentionally denying the low income and minority population in the urban core and West End affordable transit connections to potential economic development in the suburbs” and plotting a “toll collection scheme” that “disproportionately impacts” classes protected by the Civil Rights Act.

The grievance is shared by State Rep. Jim Wayne, D-35, who proposed relief for the working poor during the last regular session of the General Assembly. In a March 15 meeting of the House Appropriations & Revenue Committee, Wayne floated the notion of exemptions or rebates for low-income Kentuckians who commute to jobs in Indiana and would pay $500 per year under a preliminary plan to toll frequent users in passenger vehicles $1 per crossing.

“Tolls are a regressive, horrible tax on the poor,” he said. “And the best way to finance this project, as all highway projects, is through a more equitable increase in the gasoline tax. But that’s not on the table. It’s never been on the table. So we’re stuck in Jefferson County with this finance plan that’s being proposed — and it’s something I find offensive.”

Wayne was reminded that interstate motorists who can’t afford tolls could use the Sherman Minton Bridge, which he later learned is projected to be tolled starting in 2031. His outrage spilled across the House floor on April 12. “This was either an intended or unintended deception by the Transportation Cabinet or the Bridges Authority — or both,” he said.

As the House debate continued, Wayne gave context to his perspective: “Twenty years ago, behind closed doors, the power elite of white, primarily male leaders in Louisville decided to move 10,000 people in my district to make way for an expanded airport in a densely populated urban area — and it was done in an unconscionable fashion.”

Like most state boards and commissions, the 12-member bi-state Bridges Authority is predominantly white, male and affluent.

Ben Richmond, one of its two African-American members, is also president and CEO of the Louisville Urban League, whose website says its “mission is to assist African-American and disadvantaged persons in the achievement of social and economic equality …” He did not respond to a request for comment on the civil rights threats alleged in the lawsuit.

Another claim involves the Kentucky Transportation Cabinet’s steadfast refusal to disclose information surrounding its May acquisition of a 50-acre Prospect estate aligned with the approach to the proposed eastern bridge. In 2000, the Soterion Corp. purchased the Drumanard estate for $2.9 million. After negotiations — including an alleged Sept. 20, 2010, meeting between R. Scott Jones, Soterion president, and Mike Hancock, cabinet secretary — the cabinet bought it for $8.3 million.

Via three open records requests, CART attorney Bud Hixson sought to learn whether conflicts of interest had tainted the processes by which the Drumanard route was selected and the sale price negotiated.

The Transportation Cabinet responded, “We know of no document … which would identify all the shareholders, partners, and ultimate beneficiaries …”

Soterion duly authorized “either one of two officers to act on” its behalf, the cabinet noted in arguing that it’s “not mandated by law to … deal with a corporation’s officers and shareholders on an individual basis.”

After the cabinet denied 12 of 13 items requested, Hixson appealed to Attorney General Jack Conway, who issued a decision on July 27. While it upholds the cabinet’s refusal to provide the state’s $6.8 million appraisal “until all the property needed for the project has been acquired,” it rejects the “general denial of his remaining requests …”

CART’s lawsuit states, “The shareholders and possible conflicts of interest have not been determined and KYTC has provided no records to Plaintiffs responsive to the AG Opinion.” Other issues CART is challenging include: