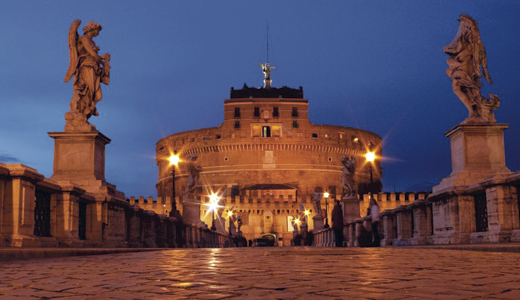 Floria Tosca, the celebrated singer and innocent beauty of the tragic opera “Tosca,” is not a real person. But the church Sant’Andrea della Valle, where Tosca becomes suspicious of her lover Mario, is a real place. And so is the Castel Sant’Angelo, from which Tosca leaps to her death. The people are fictional, but the places are real, as composer Giacomo Puccini calls upon famous landmarks of Rome, the eternal city, to create the stage for the opera “Tosca.”

Setting fictional characters in real places, and in historically known times, is a particularly Puccini device, connecting his opera’s stories to places and events with whom the audience may identify. Puccini’s “Madame Butterfly” (1904), for example, is set in Japan at the turn of the 20th century, as the East is opening and Europeans are just discovering the culture of the orient. “La Boheme” (1896) is set in cosmopolitan/bohemian Paris. “Tosca” takes place in the Rome of 1800, as Italy is swept into the social change of the Napoleonic era.

“This really starts back with the original play ‘La Tosca,’ by Victorien Sardou,” says Deanna Hoying, Kentucky Opera’s director of education. “Sardou was very specific: This takes place on June 17 and 18, 1800, those two days, just after the Battle of Marengo. That’s the political backdrop. Then he mixes in the real places with the fictional characters. And it is interesting that these places are all still there in Rome. You can go to the Castel Sant’Angelo and see it.”

The Castel is originally the Tomb of Hadrian, built about 135 A.D. by the Roman Emperor Hadrian as his own mausoleum. We’ve seen the tall stone building most recently in the Tom Hanks movie “Angels and Demons.” The Palazzo Farnese is Baron Scarpia’s police headquarters, and the scene of his extortion and assault of Tosca. The Palazzo (1517) dates to the Borgia intrigues, but is now the French Embassy.

A good example of mixing real people with fictional ones is a passing mention of Queen Maria Carolina of Naples. At that point in 1800, one presumes Maria Carolina is still eating royal cake. But her reign may have a limited shelf life. She is the sister of Marie Antoinette.

Audiences today may not be aware of the historical allusions, but Puccini peppers the plot with them to propel the opera along. “One thing Puccini did was study the bells of the church, Sant’Andrea della Valle,” notes Hoying. “He wanted to get the tones of the chimes in just the right notes, so when you hear them in the opera, it is correct — nothing to slow the story down.”

And everything to keep it going. “Puccini draws you in and never lets you stop,” says Hoying. “Not like Verdi, where they sing and stop, and everyone applauds. Puccini writes it straight through, not ever letting the audience out of the theatrical experience.” Except, she says, thinking … “Maybe at the start of Act III. After the intensity of Act II, with the torture of Mario, and Tosca giving in to Scarpia, it’s almost as if Puccini feels we need a little break in the action to take a breath.”

Thus Act III begins with an orchestra prelude — calmer, with tiny bell sounds embedded within the music. “It’s 4 a.m. after a tumultuous day, and things are quiet,” says Hoying. “We maybe hear the bells on goats as boys shepherd the flocks along before dawn.”

But then Tosca is high on the roof of the Castel Sant’Angelo. There are famous statues about — looming, looking. Witnesses. The end is near.