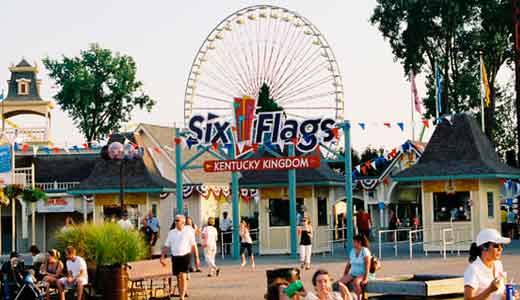 Two months after the Koch family abruptly abandoned plans to resurrect the long-dormant Kentucky Kingdom as Bluegrass Boardwalk, August brought what appeared to be a glimmer of hope for the amusement park.

Almost simultaneously, the Kentucky State Fair Board announced it would issue a formal request for proposals (RFP) to find a new operator for the park at the request of Gov. Steve Beshear, who wanted to “cast a wide net.”

While Beshear says Hart is welcome to enter the RFP process along with other interested operators, he let it be known that he had issues with Hart’s proposal and questioned whether the state should pursue alternative uses for the state property if the process fails.

On Sept. 11, the Kentucky Finance and Administration Cabinet issued the request for proposals with explicit terms that seemed to be aimed directly at disqualifying Hart’s proposal. And while last week the Fair Board opened the park for viewing by interested investors, only one person besides Hart’s team bothered to show up.

All of which raise questions as to whether this solicitation for a new operator is a step toward putting life back into the park, or the final countdown to its razing for something new.

Immediately after Hart announced his new proposal for the park, both Beshear and Lt. Gov. Jerry Abramson called it a risky deal for taxpayers.

Their concern was that Hart asked the state to guarantee the $30 million bank loan that would be used to develop the park in case of default, which Beshear said would put “taxpayers on the hook.”

This reluctance was written directly into the RFP in a section titled “DEALBREAKERS — PROHIBITIONS,” which excluded from consideration any submission requiring the state to be responsible for a default.

An examination of all currently open RFPs in the Finance Cabinet’s online database reveals this is the only solicitation with such a “dealbreakers” section, though Beshear spokeswoman Kerri Richardson tells LEO it is not uncommon for the state to set prohibitions.

“While the term ‘dealbreakers’ may have not been used in the past, it is not uncommon to inform potential bidders about certain aspects of the RFP in which the commonwealth has no room for variance, such as a budget issue, a performance schedule, and so on,” Richardson says.

In a possible further hindrance for Hart’s group, the evaluation criteria in the RFP neglects to give any consideration for past success or experience in running an amusement park. Half of the available “points” that proposals are scored upon deal with the financial details of the plan, with the rest devoted to technical and aesthetic aspects of the park.

In the 1990s, Hart took over operations of the failing Kentucky Kingdom, turning it into a top tourist attraction in the state. He followed up in 2000 by turning around the Magic Springs & Crystal Falls amusement park in Arkansas.

Such a lack of interest in gauging the experience of a solicitor for a major state project is rare, as the most recent RFP for the Fair Board to build a hotel on their property assigns half of the scoring criteria to the past experience of the contractor.

Richardson tells LEO, “The RFP was crafted in a less prescriptive manner to allow respondents to demonstrate to the commonwealth how they would refurbish and run the park.”

But are these potential obstacles to Hart’s proposal necessary in order to protect taxpayer dollars?

While the prospect of guaranteeing a $30 million loan is daunting, recent state-financed economic impact studies for the reopening of the park show the potential for a significant increase in state revenue — taxpayer dollars that currently aren’t being realized due to an empty park.

The initial economic impact study for Hart’s 2010 proposal showed the potential for a $3 billion impact on the economy over 20 years, generating roughly $10 million per year in state revenue through taxes, parking and lease payments. A later, more conservative estimate for Kentucky Kingdom — and the much smaller-scale Bluegrass Boardwalk — projected more than $5 million per year in revenue for the state, and $700,000 in tax revenue for Metro government.

Hart has further argued that the $30 million he wants guaranteed is ultimately going toward renovating the state’s own property, and the longer the park sits idle and deteriorating, the more difficult it will be to open.

Richardson declined to give further specifics on why such a guarantee by the state is a bad deal for taxpayers, citing current litigation Hart initiated against the Fair Board to collect money he says is owed to him, and the “ongoing confidential RFP process.”

In a written statement, Hart tells LEO: “As my company is in the process of responding to Gov. Beshear’s (RFP) to reopen Kentucky Kingdom, it is inappropriate for me to comment at this time.”

Even if the Beshear administration decides to abandon the amusement park business and demolish its structures, the Fair Board estimates that such a task would cost $8 million.

But is there some other use for the land that could bring even greater economic impact and tax revenue for state and local government, as well as provide much-needed jobs? Beshear and Abramson have strongly hinted at looking for alternatives on the property if the RFP submissions aren’t to their liking.

When asked if and with whom Beshear has discussed alternative uses for the site, Richardson says the governor “has stated publicly that his intent is to see that the park space is utilized in a way that creates economic growth for the area. We are hopeful that we receive viable proposals from the RFP process.”