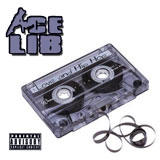 Much like characters on the namesake television catastrophe, Ace Lib apparently has more money than he knows what to do with. The production on the bulk of this sounds expensive, if somewhat familiar. Also like the TV show, Ace Lib’s about as vapid and emo as Stevie J and company. The 19 tracks, split into “Love” and “Hip Hop” halves, don’t quite stick to the concept; halfway through the second set, he reverts to his LL “I Need Love” persona, though with toned-down production (if you’re keeping track, Synths=Love, while Samples=Hip Hop). If you’re still on the fence, I’ll leave you with quotes from emcee Dre DaSon on “Heartbeat”: The only time I dog you is when I’m on you like a chew toy. And I don’t eat the white bread, because I love your butternut.