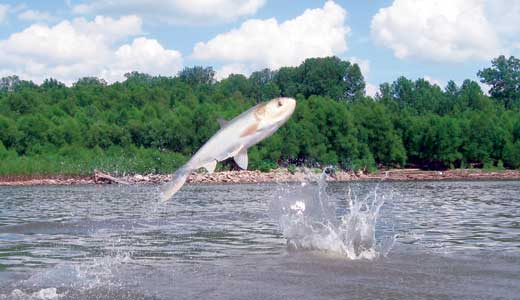 It’s probably rare for a Naval veteran with 25 years fishing experience to see something in the water that confounds him, but while kayaking near the Falls of the Ohio a few summers ago, Mark Watanabe began noticing unfamiliar fish in the waters below Louisville’s McAlpine Dam. One species was an athletic, 5- to 10-pounder prone to taking flight above the river’s surface. Another was the flying fish’s more imposing cousin, an estimated 20- to 30-pounder with strange eyes placed menacingly beside the corners of its expansive mouth.

After consulting the Internet, Watanabe discovered the fish he encountered were both destructive, highly invasive varieties of Asian carp, still somewhat new to our waters and steadily making their way north. An Internet search of the silver carp (the jumper) and bighead (which can grow to a monstrous 100-plus pounds) unveils the stuff horror movies are made of. Armadas of flying silver carp — often described as 40-pound missiles — can be seen carpet-bombing motor boats on YouTube. Water skiers and inner-tubers have been taken out with concussions, black eyes, broken noses, broken jaws and broken collarbones reported.

But the real threat is what’s occurring below the surface. Asian carp, with their voracious appetite for plankton, were imported from China in the ’70s to help filter ponds and sewage treatment facilities in the United States. The carp soon infiltrated the basin of the Mississippi River and have since been spawning their way toward Lake Michigan — what’s been depicted as a sort of doomsday scenario should they arrive there. The widely held fear is that these aggressive feeders will out-compete indigenous species there and wipe out the world’s largest freshwater fishery.

“If you’re fishing below the Kentucky Dam, one day you might not see any. Next day, there’ll be so many of them you can’t get your lure down to the bottom of the river,” says Ron Brooks, fisheries director at the Kentucky Department of Fish and Wildlife. “They travel in big schools, and when they move in, pretty much everything moves out. These things tend to move fairly quickly upriver, take a couple of years to establish themselves, and then they’re everywhere.”

The Asian carp invasion is serious enough that the Army Corps of Engineers has constructed an electric barrier designed to keep this threat out of the canal connecting the Mississippi to the Great Lakes tributaries. But many believe this won’t catch all of the fish.

Fortunately, like in any good monster movie, this seemingly unstoppable force does have a fatal flaw: They taste good.

The fish have been consumed in China for millennia and resemble the generally unpopular common carp in name alone.

Annual contracts to ship 60 million pounds of Asian carp back to its country of origin are currently held by two U.S. companies. However, the hurdles involved in trading with China are proving insurmountable. This is why some, including the director of Kentucky Fisheries, believe the best way to curtail this influx is through the domestic marketplace.

We asked Mark Watanabe if he’s ever eaten any of the Asian carp he’s caught. Watanabe — a co-creator of Yakangler.com, a site dedicated to kayak fishing — expressed a reluctance to consume anything fished from the Ohio, but did offer to create a thread on Yakangler’s message board. The post — “Anyone eat Asian carp?” — yielded a chorus of unanimous “Nos,” ranging from “Think I’ll pass” to “Not that hungry yet.”

This lack of enthusiasm is fairly illustrative of the perception of Asian carp in North America and demonstrates a key challenge that advocates like Ron Brooks face in landing the fish on our dinner plates.

Asked if it was safe to eat a bighead carp caught in the Ohio, Brooks answered with a definitive yes, stating that because of its plankton diet, they consume fewer accumulates, making them safer to eat than even catfish.

“These fish have fewer contaminates than any other species that we’re aware of,” he says. “Their fatty acids are the good kind, and when you really break it down, these fish are much better to eat than anything you can get out of the river.”

Brooks still has a lot of convincing to do. In the case of the Asian carp, we can expect the type of rebranding that pushed the Patagonian Toothfish (i.e. Chilean sea bass) onto the over-fished list. It will certainly help that Brooks seems to have flavor on his side. At a legislative dinner last February, Brooks conducted a blind taste test, serving fried Asian carp (aka “Kentucky Tuna,” or “Silverfin,” if you prefer a sushi-grade implication) alongside the traditional catfish dinner.

“We put different color toothpicks in the meat and then I went around afterwards and polled them to see which one they liked better. Ninety percent of them liked the Asian carp better than catfish. I mean, they taste good!”