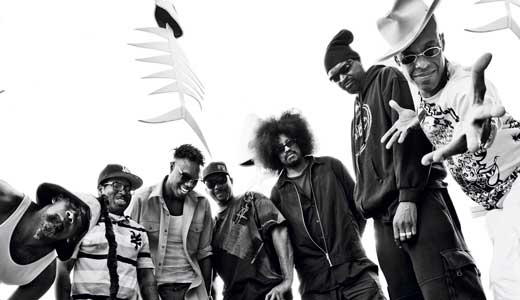 There aren’t a lot of 30-year-old bands still writing, recording and touring whose lead singer lives with his mom. Such is the case of Fishbone. Three decades strong without ever having that career-defining single, that four-minute moment that provides security for life, Fishbone are like Charles Barkley.

It’s not like they haven’t stopped trying. Years after their major-label deal ended, the group has put out one of the most unified and satisfying records of their career, Crazy Glue, and have released the excellent career-spanning documentary feature film, “Everyday Sunshine: The Story of Fishbone.”

NORWOOD FISHER: The film was proposed at the most inopportune time. When the director came to talk to us, we were in a very rough state of business. I actually didn’t want to do it, because that wasn’t the face I was looking to put forward. I went to the director and said, “I don’t want to do a story on the past. I want to do it on the band right now.” And they agreed to it, but you know, they had to tell the story that was the most interesting. Even if it wasn’t what I was originally looking for, I got something a whole lot better from this. I couldn’t imagine the response we’ve been getting from this. It’s unreal.

LEO: What were the band’s reactions to the solo interviews?

NF: Ultimately, everybody gave it a thumbs-up. Everybody involved can see it as something they can stand behind. The directors didn’t add any extra drama to it. They didn’t add anything spectacular to it that wasn’t there. It was really honest. I haven’t heard any complaints from the band.

LEO: What has been the fan response?

NF: People stepped up after the film and were just, “I had a lot of questions about the band, and you guys answered them all.” With the directors, one was a fan, and the other became a fan over the course of it, and so I think together, their instincts mirrored what was going on in the average Fishbone fan’s head.

LEO: At the end of the film, you and (singer/saxophonist) Angelo (Moore) get together in the studio for a writing session, and it’s called the first real collaborative session in a long time. The new album, Crazy Glue, has a cohesion to it that is refreshing. Was this a result of that newfound togetherness?

NF: It pointed us in the Crazy Glue direction. Since that writing session (in the movie), there were breakdowns. We’d get together, then we’re at odds again, and we can’t do this. Really, after all that shit was done, Angelo insisted we go see a counselor, just me and him. He chose the counselor and I showed up, and I was pissed! I thought it would be a waste of time. At the end of the day, it was helpful. That is actually what got us in the space where we could move forward with Crazy Glue. There was an urgency. DC-Jam Records came into the picture. They stepped up with the opportunity, and we said, “Let’s do this.”

LEO: What’s next for the band?

NF:We have a five-song EP that’s completed. I’m hoping that can come out early next year while we are beginning to work on a full-length that will hopefully come out early summer.

LEO: Do you have titles for either?

NF: The EP, we have a tentative title of Choke’s On You, but now I don’t know. That’s the title today. There’s a song called “Unstuck,” and in it, Angelo says “unstickification,” and that sounds like a title to me. So we’ll see.

LEO: After 30 years in music, what’s your biggest takeaway?

NF: I tell you what. We just came out of Alaska, two shows in Anchorage. I’m on the plane on the way home. I’m glad to be going home, but I have these moments where (I think), “My life ain’t perfect, but I’m doing what the fuck I want to do. My life is good.” I walk away with that wholesome goodness.