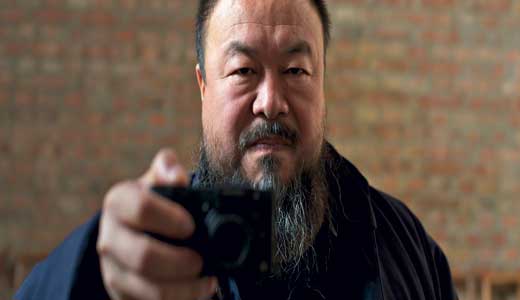 This fascinating figure encountered documentarian Alison Klayman when she decided to go abroad after college with no Chinese- or Mandarin-speaking experience. Klayman tells LEO all about meeting Weiwei in 2008, when a friend who was curating the artist’s exhibition asked her to shoot video.

LEO: Weiwei seems quite giving to the media, yet a little intimidating at the same time. How did you find him?
Alison Klayman: Absolutely, he can be prickly, he can be intimidating. I think of the scene in the movie where he removes the officer’s sunglasses. But, I was pre-warned by my roommate. Weiwei has been known to intimidate an interviewer and make people cry. I approached him as a formidable figure, so I was pleasantly surprised to discover how playful he was. He has a very generous spirit and warmth.

LEO: He defined himself as a chess player in your film. Did you ever feel like you were being used as a weapon in his arsenal, willing or otherwise?
AK: I definitely have been asked that, and my honest answer is a pretty wholehearted no — just because this is something I was always aware of, that he’s incredibly media savvy, someone who plays with the fake and the real. His studio is called “Fake Designs,” so you kind of have to wonder when he is being genuine. In that sense, I did come in with a healthy dose of skepticism. But, maybe a little bit, anyone who comes in contact with him is going to be exposed to his message.

LEO: It’s remarkable that when the government bulldozed his Shanghai art studio, he simply turned his cameras on and called this his greatest work of art. A lot of Weiwei’s art is based on how the world reacts to him and vice verse.
AK: Absolutely. I just read this interview he did with the Smithsonian and he says that quite directly. The police had come to interrogate him, and they said, “Weiwei, you’re so influential.” And he said, “Yes, but I’m more influential because of the way the government has dealt with me. In a way, they have created me.” Those were the words he chose, not to take away his own agency in the situation, but everything is really magnified by the way the government reacts to his projects. This is what ends up being the plot of “Never Sorry,” the chess game he talks about, the idea that it’s one move, and then a reaction and a reaction. And he doesn’t back down.

LEO: It’s chess but also a kind of staring contest. And Weiwei is unflinching. I think of that absurd scene with his cameras pointed directly at the police’s. I think for a lot of people, the only surprising thing about Weiwei’s 81-day detainment is that it hadn’t happen sooner. Why haven’t more of his cameras been confiscated or his Twitter accounts frozen?
AK: That is definitely one of the central questions of this whole project for me and something I asked him within the first week of knowing him. Why aren’t you in jail? This gives a pretty big hint of why he’s a worthy subject. How many people do you know who, within the first week, you feel compelled to ask, “Why aren’t you in jail?” And his answer was, “Am I really the right person to ask that?” Which is fair, because it’s not up to him whether or not he’s in jail. The answer of many of his peers was really interesting, “Because he’s an artist.” That’s been really hard for me to understand. He does engage with these issues, and is very much a political organizer, someone who does dissent. But he’s doing it as an artist. He’s not putting forward an alternative political road map. But it is interesting what differentiates him from Liu Xiaobo, who is the Nobel Peace Prize Laureate, but also got an 11-year prison sentence.

LEO: Has China changed because of Weiwei?
AK: I think so. He’s been on the cusp of this whole notion of the transformative power of the Internet and social media. In recent months, with the Arab Spring and WikiLeaks, it’s become easier to appreciate what he’s been talking about all this time. There is a lot of exchange now between China and the rest of the world, much more travel happening than there was before, and I do believe you can’t have that kind of openness and expect things to stay the same. You always need a figure like him in these societies to push things forward and remind everyone what’s important.

LEO: Is there an American artist who matches Weiwei’s fearlessness?
AK: There’s no one-to-one comparison, but I think of Stephen Colbert and what he does. His work with the Super PAC he started taught me a ton about something vital to our democracy that I really should know. It makes me think of Weiwei, too, the way he always has his lawyer on — Weiwei said to me, “Who knew a movie about an artist would have so many lawyers!”