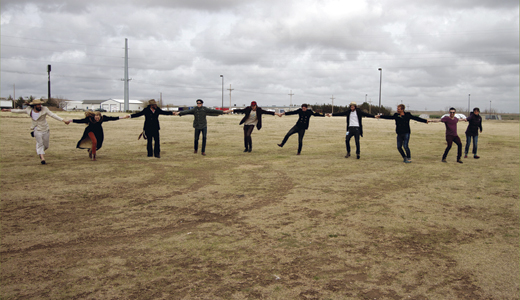 It was hard to miss “Home” a couple of years ago, as the hit single from Edward Sharpe & the Magnetic Zeros’ first album, Up From Below, penetrated pop and public radio airwaves as well as TV commercials and soundtracks. The Up With People-meets-Manson Family vibe of the sprawling band has charmed many, though some critics have doubted the sincerity of their sunny perspective.

A collective that probably could only have begun in Los Angeles, the band was formed by Alex Ebert, who had previously sought dance-rock stardom with Ima Robot. After beating his youthful demons, Ebert met Jade Castrinos, whose powerful vocals propelled “Home.” They brought together another dozen or so rotating collaborators, and a musical family was born.

One of those SoCal collaborators was Nora Kirkpatrick, an actress who met the pair at Burning Man. A co-star of ABC Family’s “Greek” and the web series “Dorm Life,” Kirkpatrick joined the band on accordion, though she lacked experience on the instrument at the time. She now also adds keyboards, harmonica, tambourine and backing vocals, and has begun writing scores and songs for films as a third job.

LEO spoke with her recently, as she pulled her bicycle over to the side of the road, to discuss the band’s mellower second album, Here, its more upbeat follow-up, and the lasting virtues of the comedy film “Three Amigos!”

LEO: Between your acting work and the people you’ve mentioned in previous interviews, you seem to love comedy and improv.

Nora Kirkpatrick: Yeah, that’s been all my training. I try to get back to that whenever I can … “Dorm Life” was a bit of that, though “Greek” was all scripted.

LEO: Does that training help when you’re in a band with a dozen people?

NK: Yeah, it does. I think there’s a lot of real-world applications in acting training. It can come in really handy to communicate with different people, even though you’re not acting in real life.

LEO: I read that “Three Amigos!” was a big influence on you and your comedy.

NK: Oh, yeah! Totally! I think that Dorothy Gish monologue that Martin Short gives was probably the first thing I ever memorized. I told my parents I needed to show them something, and I sat them down and performed the monologue. That’s when I told them I was interested in theater.

LEO: So that’s when you came out to them as an actor?

LEO: You joined the band after you met Alex and Jade, because you’d just graduated from UCLA and were figuring out what to do next, right?

NK: Yeah, that’s basically right. That was about five years ago, and we’ve been touring and recording ever since.

LEO: The new album is mellower, more serious than the first.

NK: Yeah, we recorded 40 songs and ended up splitting them up over two albums. They seem more mellow, but they’re not the only kinds of songs we recorded. We have an album coming out in early 2013 that’s a bit more rambunctious.

NK: Amazing. Exciting. Because we have so many people on stage, there’s a great light show happening, the new songs are great — we’re playing songs from all three albums, so you’ll hear songs you’ve never heard before.

with Clap Your Hands Say Yeah