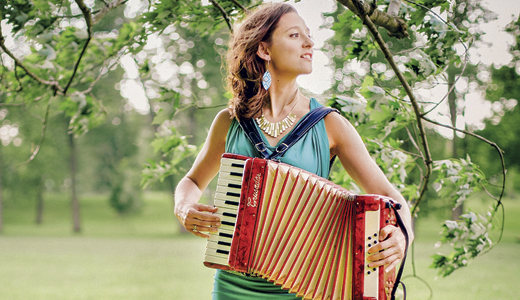 “When you’re an artist, you always feel like your current work is the best,” says Suz Slezak, “because you’re the oldest and most mature that you’ve ever been — hopefully, most mature,” she laughs. “So I think there is a sense that we’ve really gotten our stride now.”

Slezak is the fiddle player, a vocalist, and she also plays a quijada (donkey jawbone) in the David Wax Museum. The band — also including Wax, who sings and plays a Mexican guitar called a jarana, and multi-instrumentalist Greg Glassman — has been earning attention for their mixture of indie rock, Americana and traditional Mexican influences since their third album was released last year.

“Everything Is Saved was our first record to get attention nationally, even though we made two before it, so it kind of feels like our first … it was the first time we were really experimenting with these Mexican sounds. We’re all Americans, we grew up listening to country and bluegrass and folk music … we’ve been trying to blend, getting these sounds together in a way that’s unique and new and fresh.”

Their fourth, Knock Knock Get Up, was released last week and adds African and Caribbean influences to their blend. LEO spoke with Slezak that day as the band traveled to the first show of their tour.

Suz Slezak: We’re en route from Massachusetts to Denver, and stopping because our tires are bald. So we’re getting new tires and dealing with the logistics of touring.

LEO: I was going to ask how you were celebrating, but obviously your working life is getting in the way of your partying.

SS: (laughs) Yeah, it’s true. I think Thursday (in Denver) will feel exciting, ’cause it’s the first show … We’ve got a new percussionist with us who’s absolutely phenomenal.

LEO: I imagine the new percussionist is bringing some offbeat instruments in. What’s being added?

SS: He’s done a blend, as you might imagine — that’s what we do. He is bringing a small drum kit, a traditional kit, and then he’s also bringing a cajón, which is the box that’s used throughout Latin America. It’s a percussive wooden box, and he has all these other bells and whistles, including goat hooves! Have you ever heard those played? It’s a really awesome, hollow, clackity-thumping sound. I love that we have a drummer/farm animal part of our band (laughs).

LEO: But that’s not even your only animal.

SS: Yeah, that brings it up to two, after the donkey jawbone!

LEO: When you’re driving on the road, do you ever see animals and think, “I wonder what we could use out of that”?

SS: I don’t want to admit that, but … yes! (laughs) Actually, my little brother’s a farmer, and he tells this story: He killed a pig and buried its carcass. The next day, the carcass was dug up by some animal at night. So he re-buried it. The next day, it was dug up again — this time, not all of it, just the jawbone of the pig. And so he thought, “Man, I think this is a sign, I have to give this to Suz.” So he presented me with this pig jawbone that doesn’t actually rattle like the donkey jawbone, but we have it as a mascot in front of our van. Vegans beware! (laughs)