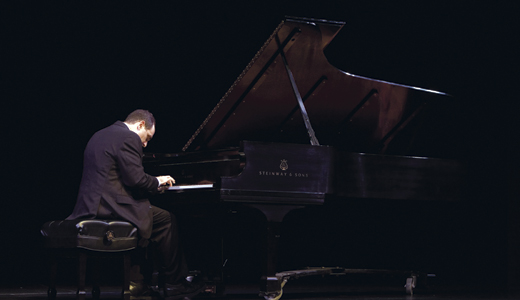 IdeaFestival (“IF”) touts itself as “a celebration for the intellectually curious.” Amidst this year’s varied presenters — who will address issues ranging from “How the Hippies Saved Physics” to “Mash-Up: Dynamics of Chess & Business Strategy” — is psychiatrist Richard Kogan. Dr. Kogan is no stranger to IF, having appeared in the program five times before. In addition to his clinical practice, Kogan is a classically trained pianist and attended Juilliard even before enrolling in college. He has found at least two ways to combine his musical and medical backgrounds — as one of the founders of the Weill Cornell Medical College Music and Medicine Initiative, and as a presenter of concerts that delve into the psychiatric issues of the great composers.

For this year’s concert, Kogan will explore the music and mind of Ludwig van Beethoven, certainly one of the best-known composers of Western classical music. Even to those whose knowledge of the canon is limited, Beethoven stands out for such “hits” as “Ode to Joy” (Ninth Symphony) and “Fur Elise.” Additionally, most who recognize his name also know that he grew deaf over the years but continued to compose. Kogan discussed his involvement with music and medicine, and his exploration of Beethoven, in a telephone interview with LEO.

LEO: As a returning presenter for IF, what do you find intriguing or enjoyable about this setting?
Richard Kogan: I do my lecture/concert in a variety of settings, including concert halls and medical symposiums. I especially like IF because this is a venue where speakers and listeners gather to be excited by ideas being exchanged. The audience consists of lifelong learners who are stimulated by new concepts.

LEO: Over the years, you have made presentations on Tchaikovsky, Schumann and others. How do you choose a composer?
RK: My criteria are: First, I want to explore a composer from the past, but one whose music still resonates in the present. The themes they sought to express must still be relevant to the present era. For example, Beethoven’s Ninth Symphony, the “Ode to Joy,” was played when the Berlin Wall was torn down. The Ninth has themes of universal brotherhood and the highest aspirations of humanity. Another criterion for me is: “Can I tell the person’s story at the piano?” So, since composers like Mahler and Wagner didn’t really write for the piano, I can’t really present them. Beethoven, though, wrote 32 sonatas, and I will be playing three of them. I feel that I can convey his creative process. My main interest is the creative process — how does creativity enter our lives? And, I am looking to present composers who had issues.

LEO: What are some of the aspects of Beethoven you find intriguing?
RK: Beethoven, in particular, had to cope with adversity. He had deafness, which is a hardship for anybody, but for a musician, catastrophic. He even contemplated taking his life but decided not to until he fulfilled his destiny. Here is the core issue: Once he was locked inside the silent world of his imagination, he was not as influenced by his contemporaries. He began to conjure up sounds and transcend his obstacles.

Beethoven remains one of the giant composers; I’ve played his music all my life. His is one of the most inspiring stories. I’ve been shaping, and continue to shape, my ideas about him.

LEO: Can you tell us about how you will present Beethoven?
RK: I will frame the talk by speaking of his evolution. He evolved most dramatically after his deafness set in. There were very important stylistic shifts in what are recognized as his early, middle and late periods. I will play one piece from each of these periods. I will also be discussing the psychological underpinnings of his works, as represented by these periods. Beethoven was the quintessential “tortured artist” — disheveled, subject to violent rages, volatile mood swings, and probably even persecutory delusions. Some academicians have advanced the theory that Beethoven was bipolar. As for me, I see how difficult it is to do a retrospective diagnosis. I can say with confidence, however, that he was capable of expressing melancholia and elation, euphoria, in a musical world, as well as anyone who has ever existed.

LEO: How does being a practicing psychiatrist and musician shape your overall work and life?
RK: I have sort of developed a third career. In addition to clinical work and musical presentations, I have been active in working on de-stigmatization issues, including work with NAMI (the National Alliance on Mental Illness, a nonprofit education, advocacy and support organization). Unfortunately, mental illness is still associated with stigma. One of the best ways I can help is by presenting programs on artists such as Schumann and Tchaikovsky, which can help break down the barriers of stigma and educate the public about such issues.

(some events are already sold out):