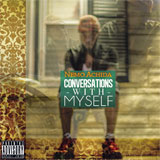 One can argue the logic of being signed to the great producer 88-Keys’ record label, Locksmith Music, and then self-producing your next project, but hey, maybe this is some covert ninja move we mere mortals cannot conceive, or it’s 88-as-Yoda educating the emcee that the checks are bigger when you’re self-contained (and not sampling, which ruins our logic here). Achida has been able to do with his career what nearly no other Kentucky emcee since Nappy Roots has been able to do, parlay his skills outside our borders. While his skills are evident, his projects to date continue to show him as a solid B-student, and Conversations is no different. Does he have a breakout long player in him? Do we care, if his output is this consistently good, even if it isn’t great?