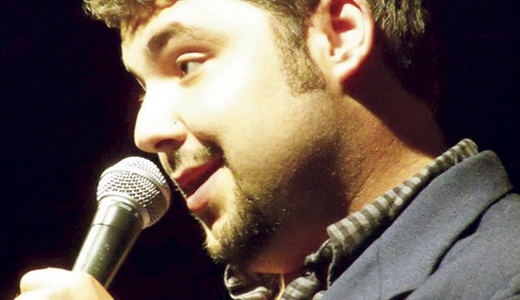 When Raanan Hershberg arrived on the scene three years ago, he instantly stood out among the pack with his brash, heady sense of humor. Since then, he has worked with comics like Rory Scovel and John Witherspoon, appeared at the Laugh Your Asheville Off! comedy festival, and has been the mastermind behind ongoing local shows “The Young, Dumb, and Full of Comedy Show” and “The Roast of …” series. This weekend, Hershberg will have his first opportunity to headline a show in his hometown. We met at the Grape Leaf for a chat.

LEO: I know you got into comedy for easy drugs, cheap women and good money. How’s that working out for you?
RAANAN HERSHBERG: Subconsciously, I think because I’m fat, it’s harder for me to get women … and I assume that, if one day I get famous, it will be easier to get hot girls to sleep with me. So basically, in my head, it’s easier for me to become famous than to just work out.

LEO: Being hometown shows, do you get extra support from your friends and family?
RH: I hope not. I kind of go on stage to say the things I can’t say around my family. It kind of sucks when they’re there. I have convinced my parents I haven’t had sex yet. And all of my other friends are comedians and we hate each other — so I don’t have much support (laughs).

LEO: With two successful ongoing shows, hitting the road and headlining, do you feel like your career has progressed faster in three years than most?
RH: Eddie Murphy definitely did better in three years than I did. I don’t know, we all go out at our own pace. My friend Jacob Williams, who started with me, is on “America’s Got Talent” right now — so I don’t know that I’m doing any better or worse than anyone else.

LEO: When you write, does it start with a kernel of an idea or do you just start ranting?
RH: I don’t really sit down and write. I have trouble with it because I think comedy is really more analytical than it is creative. So, when you sit down in a room with a piece of paper, it’s harder because you don’t have anything to analyze. You don’t have an object or a subject. To me, it’s more important to see something funny in something I’m doing.

LEO: Do you ever hear a joke you wish you had written?
RH: Yeah, of course. But it’s not like I’m really wishing I had written it, because I’m glad whoever wrote it, wrote it; I’m glad that joke is out there. The best joke ever written, I think, was when Woody Allen takes out this watch and says: “You see this watch? My grandfather … on his deathbed … he sold me this watch.” It’s a great joke because it uses the fewest amount of words to create the biggest misdirection. In reality, there is only one word in that whole joke that makes it a joke — “sold.” It’s all about the economy of words. And that’s not with just jokes, either; economy is the key to all great art.