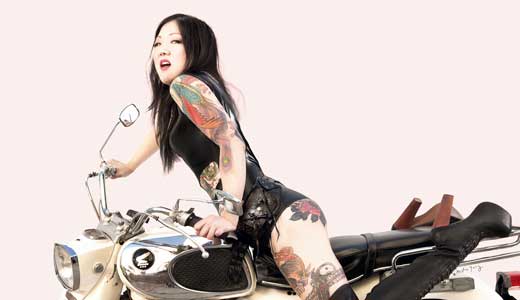 You can call Margaret Cho a lot of things — and she’s used to it — but a slacker is not one of them. In the midst of starring in two TV shows — Lifetime’s “Drop Dead Diva” and Food Network’s “Blind Dinner Party” (premiering this fall) — and reprising her Emmy-nominated guest role on “30 Rock” as Kim Jong Il, Cho is launching a new comedy tour, titled “Mother,” which brings her to Louisville’s Improv on Tuesday, Sept. 18. LEO caught up with Cho by phone from her Atlanta home.

LEO: Congratulations on your Emmy. I hear you’re going to reprise your role as Kim Jong Il this season?
Margaret Cho: Thank you! I’d love to! It would be amazing. I think it’s very successful. I’m thrilled about it.

LEO: How do you channel such an infamous person?
MC: I don’t know … it’s weird! I think it’s just — I look like him. It’s kinda very bottom line — I have the same physical structure as him. I feel like Tina Fey makes such an excellent Sarah Palin, it’s the same with me and Kim Jong Il.

LEO: What kinds of things can we expect from “Mother”?
MC: Well, it’s just kind of filthy material I formed jokes out of. I’m just trying to do the best of the best. You get to a point as a stand-up where you’re just trying to outdo yourself and be better and better.

LEO: With all these projects on your plate, why launch a comedy tour in the middle of it?
MC: I really wanted to do this, and it’s what I normally do. It’s my job. I really love stand-up, I love being on the road. It’s something I do naturally, and I feel weird when I’m not doing it.

LEO: I’m guessing there’re a lot of current events you’ll cover? I’m just going to throw out the word “Republican.”
MC: Yeah! There’s a lot of stuff about the election and the GOP and all their crazy shit. There’s so much about their weird ridiculousness.

LEO: So what’s your take on this “legitimate rape” bullshit?
MC: It’s so disgusting to me. I can’t believe people like that are not ashamed to talk. The people have such pride in their sexism and ignorance. You know what makes me sick even worse is the whole Chick-fil-A disgustingness and how people were going out for the “appreciation day” and celebrating their homophobia and their bigotry and hatred by eating this gross food. It’s so revolting on so many levels. I find it sick, and I don’t understand how these people can allow themselves to be photographed, let alone spout this kind of bullshit. And there’s a lot of that in the show as well.

But there’s a lot more, too. I live in Atlanta and am really sick of people taking on the ideas of the South being purely conservative, strictly redneck and clearly idiot. We’re sick of that attitude. It’s not all like that.

LEO: Tell me about “Blind Dinner Party,” your new show for Food Network.
MC: It’s about people getting together who have different opinions about life. Each prepares a dish, and we have a dinner party together. It’s my job to mediate the conversation — kind of like the referee and host of the party. It’s really about coming together with different kinds of food and different opinions. It’s really fascinating. I’m really proud of it.

LEO: Will there be liquor available as well?
MC: Yes! People do drink a lot. I think that is what really fuels it. People feel more comfortable — there’s a lot of connecting. There’s so many different kinds of people, and I appreciate that.

LEO: I love reading your blog. My favorite was when you said the best advice you can give someone is to believe you’re beautiful. The more you believe it, the more others will. How long did it take you to learn that?
MC: Oh, I think it took me a long time to get there. I didn’t really start actively believing that until my late 30s. When you think your life is almost over and you never felt good about yourself, that’s so depressing. I just try to make an effort to be really positive.

LEO: You’re looking pretty sexy, as always — what are you doing to keep in shape?
MC: I’m trying to just be active. I’m always struggling with it — I’m up and down. It’s really all in the mind. I try to help my body out by being as active as I can.

LEO: And if you could pick one food that didn’t have calories, what would it be?
MC: I think it would be rice cakes — not the puffed rice cakes, but the Korean rice cakes that are kind of like taffy or candy. They’re so good. I just bought a bunch yesterday and am learning how to make them myself.