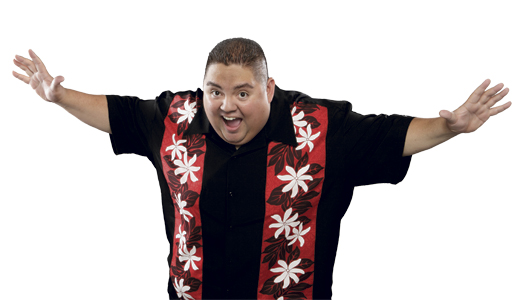 “I’m not fat, I’m fluffy” joker Gabriel Iglesias launched his career on NBC’s “Last Comic Standing.” He has since done three Comedy Central specials and is working on material for his fourth, and he had a great summer with a role in the mega-hit movie “Magic Mike.” Iglesais will perform Sunday at the Palace Theater.

LEO: What do you remember about coming through Louisville in the past?
GABRIEL IGLESIAS: I remember getting drunk and standing in front of the KFC building, and cracking jokes about throwing grilled chicken in there. Usually we’re in and out of towns pretty quickly, we do the show and get back on the bus; but last time, we did do a couple days there — we went to the bat museum, walked around, and definitely did some drinking.

LEO: Having grown up in California, how do you feel it affected your comedy?
GI: Well, it definitely formed the root of what I did, but it wasn’t until I started moving around that my comedy expanded and I started doing a broader show. I wasn’t so West Coast.

LEO: When did you know comedy was what you wanted to do?
GI: I was 10 years old. I saw “Eddie Murphy Raw,” and I was hooked. I just knew that was what I wanted to do.

LEO: Was it the leather suit?
GI: There was a time, I’m sure, when leather suits were cool … not so much anymore.

LEO: There’s a common belief that bad childhoods make great comedians. True?
GI: No, because I had a really great childhood. I wouldn’t say I’m a great comedian, but I’m pretty decent. Obviously, your childhood is going to shape you, and the more drama you have, the more material you have to pull from. But my show isn’t about me complaining about my life, it’s more me talking about all the cool stuff that happened. You don’t leave feeling bad for me.

LEO: What is your writing process like?
GI: I’ve never sat down and put pen to paper. It goes back to school — I was very bad at that, I can’t just sit down and focus. It’s gotta be organic. I’ll take something that happened, tell it onstage, and if I can pull any laughs out of it, I’ll remember those parts and tell them the next night, and expand on it a little. And then it goes on like that until I’m happy with it.

LEO: It’s probably been a good summer with your role in “Magic Mike,” which was a huge hit.
GI: Yeah, no kidding.

LEO: Was that fun to do?
GI: You know, for me, movies aren’t fun to do, because I’m not in my element. My element is going on stage, getting some laughs, and posing for some pictures — that’s what I love. I took four weeks off to do the movie; it was very hard, having to get my clock changed, being on set at 5 o’clock in the morning. But, as far as the people, they were amazing. Channing Tatum, Matthew McConaughey, Steven Soderbergh — they were all amazing.

LEO: What’s your best advice for young comedians?
GI: Talk about things everyone can relate to, and do it as clean as possible. Some guys want to be edgy niche comics who will only play to certain audiences — I want to be the comic that everyone comes out to see.