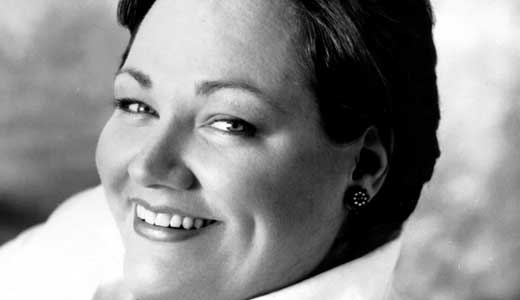 Stephanie Blythe made her name and fame singing great big opera on great big stages, filling the halls with Verdi and Wagner. But Blythe has this other life, now, too, singing the songs of the “American Songbook” on the smaller stages of smaller halls: Cole Porter, Irving Berlin and some songwriters we might have forgotten — like the trio of songsmiths Buddy DeSylva, Lew Brown and Ray Henderson.

Well, maybe “Button Up Your Overcoat” rings a bell. Or, “You’re the Cream in My Coffee.”

Those kinds of songs are the cream in Blythe’s coffee these days. So while she’s singing opera from New York to San Francisco, she’s also found time this season to stir in a recital tour of mostly 1920s-vintage popular songs. The tour makes a stop in Louisville Sunday afternoon for a Speed Concert Series recital at Comstock Hall. Along with familiar tunes by Porter and Berlin, Blythe will sing a suite of songs celebrating the poems of Emily Dickinson. And you can bet she’ll be buckling up her “Overcoat” with DeSylva, Brown and Henderson.

“Those guys, they could write a show today and have it tonight,” Blythe says. “What they would do is they would go down and rent a hotel room in Atlantic City, and they would stay there for 10 days and write a show. Just get a piano in a room and write nonstop.”

Of course, Blythe was born decades after the Roaring 20s. But she had a childhood connection to the age of records and radio.

“That was something I came upon in visits with my grandfather early on — he would play it on the stereo,” Blythe says. “But most of this music I came to quite late — and I just got the bug for it.”

Later this season, Blythe will make a recital tour tribute to Kate Smith, a star of the 1940s and ’50s. She also recently starred in the acclaimed PBS backstage story “Wagner’s Dream,” singing the role of Fricka in “Das Rheingold.”

Blythe says her opera fans don’t have to worry about her interest in the popular music of an earlier Americana. “I’m not doing it to make a statement, or to move out of opera. It’s just wonderful music, and audiences like hearing it — so why not sing it?”

Great operatic singers adore the magnificence of grand opera performed on the big stage of the Metropolitan Opera. And Blythe’s bigger-than-life mezzo-soprano voice can fill those halls. But Blythe says she especially enjoys the intimacy of the recital hall.

“What’s lovely about doing a recital in your own language is you get to connect with your audience in a very intimate way,” she explains. “When you look into an audience and you’re singing nostalgic tunes, they’re not just hearing you sing that song. They’re hearing their mother sing that song to them. Every time I perform this music, at least a dozen people come up to me and say, ‘I haven’t heard that song since my mother used to sing it to us before bed.’ Or, ‘I used to listen to that song on WXYZ radio and would sing along with my parents.’ These songs engender something real and connective between what’s performed on stage and their own personal memories.

And when it comes to fun, you can’t beat Porter’s “Let’s Do It.” Penguins in flocks, on the rocks, do it/Even little cuckoos in their clocks, do it/Let’s do it/Let’s fall in love.

All that’s in the show. As is a piano instrumental from Blythe’s performance partner Warren Brown called “Kitten on the Keys.”

In the first half of the program, Blythe sings a set of songs featuring the poetry of Emily Dickinson. The songs were written especially for Blythe by her friend James Legg, a stage and screen composer who died in 2000. Blythe is the only singer to have sung the songs.

“They were written for me, and the composer died before he was able to give them to me,” Blythe says. “His partner, Jack O’Brien, the Broadway director, just presented them to me.” Blythe describes the Dickinson songs as beautiful, “and most definitely contemporary.”

Recital-goers might also be interested in an almost unknown Cole Porter song called “The Tale of the Oyster.” Sounds interesting, says an interviewer. Tell us about it, Stephanie.

“If I tell you about the song, it’ll spoil the surprise.”