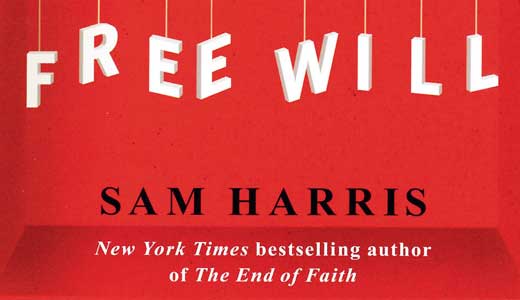 This slim tome — the main argument spans only 66 pages — spends its first paragraph introducing “free will,” the belief that we choose, and are conscious of our choosing, our actions in life. Then the author renders one of the most horrific crimes imaginable: a late-night robbery of the Petit family, a sleeping father bludgeoned with a baseball bat, the mother raped and strangled, and two daughters bound and tied and left in a house doused with gasoline and burned.

What he says next feels emphatically true: “Upon hearing about crimes of this kind, most of us naturally feel that men like (these criminals) should be held morally responsible for their actions.” But are they? According to Dr. Sam Harris, the answer is likely No. But why? It seems our past haunts us in ways we can’t account for and can scarcely control, let alone overcome. Consider this quote by LZ Granderson, found on Facebook: “Being gay isn’t a choice, but being a bigot certainly is.” As to bigotry being a “choice,” Harris begs to differ.

Harris draws on the neuroscience of the day to solidify his argument. The decision to choose chocolate ice cream over vanilla? It’s possible the choice was made in your brain several hundred milliseconds, possibly up to 10 full seconds, before you even became aware of it. “We do not know what we intend to do,” Harris claims, “until the intention itself arises.” Thinking, in other words, is deterministic: Free will as we know it is an illusion, and our behavior is determined by innumerable background causes, most of which we are blind to — where we grew up, who our parents were, what we ate for lunch, and on and on.

One of the ground assumptions Harris attacks is the idea that, given different circumstances in the past, we could have acted differently. “If only I had …” sounds nice, but because we can’t control our impulses at any time, we blame ourselves and each other, and this leads the author’s argument into what may be its most controversial area: the legal system. How are we to account for crimes and, more importantly, deal with the perpetrators?

If we view the world of laws from a deterministic viewpoint — indeed, if we view the perpetrators of bigotry, racism, sexism, homophobia, you name it — Harris says simply, it’s not their fault. Furthermore, punishment is cruel. How can we punish those who simply have no conscious control over their behavior? Rather, he insists, we should help them. But how?

Naturally, this makes for a controversial book. Though eminently readable, the particulars of scientific findings can be difficult to slog through. Yet the reward lies in Harris’ insistence that to leave behind the idea of “free will” actually leads to freedom — and compassion, not to mention acceptance and forgiveness. Sure, we have a responsibility to help people, but to get at the meat of the problem, we need to leave old thinking behind. “Where people can change, we can demand that they do so,” Harris says. “Where change is impossible or unresponsive to demands, we can chart some other course.”