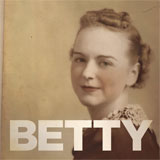 If the name above evokes the awful Orlando of the Jones clan, don’t let it spoil your listen. Betty, the Indianapolis emcee’s proper debut, is one of the more surprising releases of my summer. His name does him no justice, but Jones is a fine writer, with fully realized concepts layered and rewarding with repeated listens. From a seemingly random Frankie Lymon tribute (“Frankie,” natch) to the cleverest pun of the summer (song title: “Cordon Bleu”; line: We going ham, bitch!) to Bond-theme samples (“Needy”), Betty hits on every level. Only a couple third-quarter guest appearances slow the otherwise excellent long-player’s pace. The production is diverse: From the synth-pop sounds of modern rap radio to boom bap to a couple rock-flavored cuts, there’s not a skipper in the bunch. Oreo Jones is a name to watch.