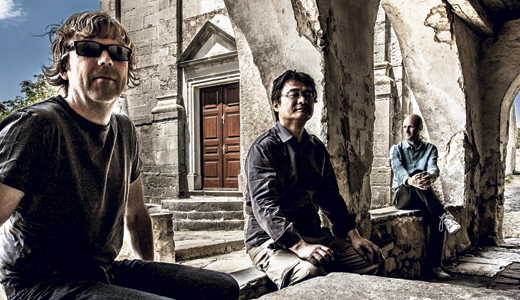 For two decades, the California Guitar Trio has traveled around the world, dazzling audiences with their intricate instrumental music. Their path shifted 12 years ago, almost to this day (Sept. 17), when Louisvillian Tyler Trotter booked them to play at the Rudyard Kipling. The successful show led to a successful relationship with Trotter, who soon became their live soundman.

CGT member Paul Richards tells LEO how Trotter built their bridge to Louisville. “We invited Tyler to come on the road with us, which he did for about six years,” Richards says. “During that time, he did a lot of his investigating for his (Louisville) Beer Store and Holy Grale. He was going to all these different breweries all over the U.S. and Belgium, taking notes and learning about what he’s doing now.”

Trotter left the band to open the Beer Store, and then Holy Grale, with partner Lori Rae Beck. The duo brings the Trio back for a special performance at Holy Grale on Friday evening.

Paul Richards: Tyler introduced us to Kevin Ratterman. We recorded two of our albums there at his place. I understand he’s got a new studio in town, we’ll have to check that out while we’re there. We had Will Oldham come and sing on a couple tracks on one of our albums, at Kevin’s place. Those guys also introduced us to Mat (Herron) and Joe (Seidt) from Karate Body, and we released our Andromeda album on vinyl through them.

So, yeah, we’ve had a great history with folks there in Louisville and continue to have really good shows. We’ve played quite a few different venues there: We played at the Clifton Center, we did the rooftop concert at Glassworks, and this will be our first time playing at Holy Grale.

LEO: I imagine you were sad to lose him.

PR: Yeah, the years he was with us, he had a very good, positive influence on what we were doing at that time. It was a struggle to do without him … A lot of the techniques he used, we incorporated into our sound — analog delays, filtering. He had lots of good suggestions, musically.

For ticket information, go to holygralelouisville.com/events.