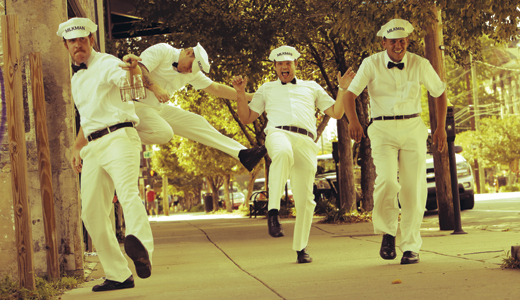 The Bad Reeds launch their second full-length album on Friday at Headliners, and they’re bringing some friends. Hunter Embry caught us up.

LEO: Solid rock is having another moment now, and your new album sounds very in synch with the new ZZ Top, who are perpetually hip. How do you feel about blues-inspired rock’s place in the commercial world?

Hunter Embry: Blues is the roots, everything else is the fruits. It’s a warm, comfy feeling for us. We started what would eventually be The Bad Reeds in high school (seven or eight years go), and the style of music was in response to everything else that was around at the time. What we were doing wasn’t hip and was better suited for our parents and their friends. It’s nice to hear music of a similar style on the radio now.

LEO: You had some local rock stars help produce this. How did that happen?

HE: Scott Carney and Peter Searcy are two of my good friends. I have the utmost respect for what they’ve done throughout their musical careers, thus far, and feel that they have a completely different “ear” than I do (different from each other, as well). I reached out to Peter because I felt he was very good at taking any style of music and making it pop. On the other hand, I wanted Scott to help broaden the sonic landscape of our songs, space it up a bit, as he does so very well.

LEO: How long has this line-up been together? Since the 1970s?

HE: Three of us — Dane, Brantley and I — got together when we were teenagers. John Clay Burchett is beating the skins for us now (Friday’s release will be his second show). Steve Sturgill will also be joining us on keys, and Rachel Hagan on backup vocals. And we may have some friends join us as well (hint, hint).