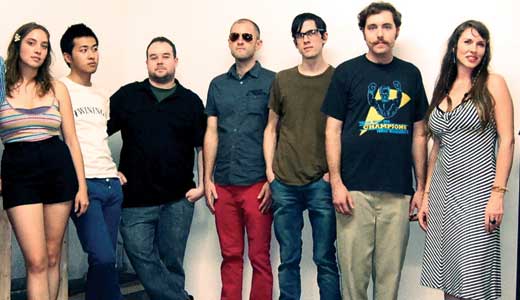 JC Denison formed what became the sprawling, 15-piece modern classical band known as Another 7 Astronauts as a way to explore composing music he enjoyed but didn’t often get to play.

As a drummer with Lucky Pineapple, Invaders, and Cheyenne Marie Mize, Denison earned a strong reputation for his percussive prowess. Now, in collaboration with another former Pineapple, trombonist Dan Moore, it’s led to a new album from A7A titled The Golden Autumn & the Afternoon.

“I usually will try to write the rhythmic idea first,” Denison says. “Getting into a lot of the modern classic stuff I’ve been into, a lot of it is very propulsive — that Phillip Glass/Steve Reich stuff is really energetic, and a lot of it’s fast. A lot of it moves. It’s minimal music, so it moves to get to a point.”

The collection is a loose concept album tied together by ideas about movement. It’s an idea that has, on a parallel track, led Denison to make his own travel plans — he will move to Chicago next month. First, though, there’s a record release show for The Golden Autumn Thursday at The Mammoth.

The album was recorded over a three-day period in December 2010 at Kevin Ratterman’s Funeral Home studio. The easiest part was keeping the musicians occupied, says Denison. “We did most of it live with everybody. There were points where we were stretched between three different floors of the Funeral Home — that was pretty amazing.

“That was why it worked. We knew we had a limited amount of time to get a lot of people in a small place to record … It was a challenge, (and) it was fun. We got a keg of beer and a bunch of food, just so nobody had the urge to leave before we got it down,” he laughs. “I think that worked out well. We had a great time. It was one of the more memorable weekends of my life, for sure.”