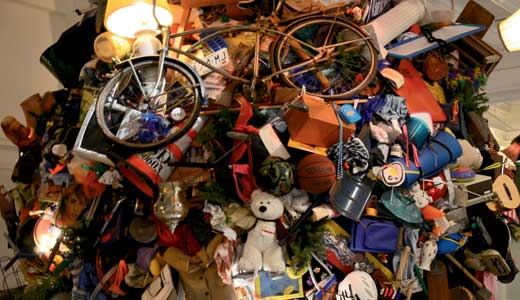 It’s pretty difficult to describe “Small Moons” by Seattle-based trio SuttonBeresCuller, which is precisely why I think you should see it.

Imagine everything from your basement, and the basements of everyone you know, congealed into six humongous spheres; I offer that by way of explanation, but there is no real equivalency — these sculptures are unique in that way. Standing in the Land of Tomorrow gallery, among this tremendous universe of objects, I experienced something absolutely novel. And judging by the reactions of the people in the exhibit with me, I wasn’t the only one.

When artwithoutwalls director Alice Gray Stites first met the artists in the group — John Sutton, Ben Beres and Zac Culler — four years ago, she told them she would bring them to Louisville one day. Four months ago, she delivered on her promise with an invitation for two one-of-a-kind commissions to be displayed during IdeaFestival 2012. Their “Trailer Park,” an actual mini park built onto a car trailer, was shown for national PARKing Day on Sept. 21 in front of the Kentucky Center, along with a variety of other pop-up parks in our city’s parking spaces. Their park was complete with live grass turf, trees and a working fountain powered by a car battery — free and open for anyone to enjoy.

Simultaneously working on “Trailer Park” and “Small Moons” in Louisville, SuttonBeresCuller relied both on the support of the LOT gallery and the generosity of Louisvillians. About two weeks ago, a call went out on Craigslist, email and by word of mouth for people to bring stuff into the gallery. “Stuff that you might think about throwing away or getting rid of” pretty much described what they were after — and what turned up was an impressive collection of our domestic detritus ranging in scale from trampettes to old computers, tricycles to TVs, keyboards, working lamps and radios, half-filled bottles of cooking oil, art history papers, curio cabinets, backpacks and baseball cards — even an old LEO rack was included. They built their geodesic armatures out of PVC pipe and started attaching the objects, which will be available for collection by their donors once the exhibition closes. Having previously done a smaller version of this project in their home city, Sutton commented that the biggest difference between what was donated there and here came down to two unsurprising things: more religious articles and horse memorabilia.

It is hard to circumambulate these spheres and not feel a sense of reverence for our material civilization, tinged with a sense of guilt for the opulence of our abundance. These are the artifacts of our private lives, displayed on the civic scale of magnitude — evidence of our consumption. “Small Moons” calls to mind the “Great Pacific Garbage Patch” and the gravitational pull of heavenly bodies; the laws of attraction that pull things together in the universe, from people in a community to planets to plastic water bottles in a gulf stream. How often do we have a chance to encounter artwork that is both personal and public, that imbues us with a local sense of awe, pride, nostalgia and shamefulness?

It’s not all gloom and doom. A cheeky humor permeates the groupings — wire antennas stick out ready to snag any inobservant passerby, books are splayed open to interesting passages, the pot of a coffee maker is filled with synthetic brown fur. However, because the objects were self-selected for public view, many of the pieces associated with “taboo” or less socially acceptable activities are proportionally absent.