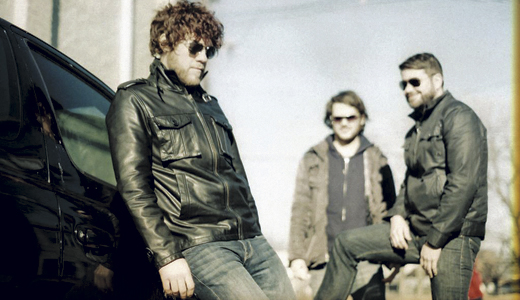 Jeremy Johnson wants his rock back.

The singer-guitarist has been making music with drummer Drew Osborne and a few different bassists for more than a decade now, with The Helgeson Story, Your Black Star, and, these days, Workers. The band’s latest full-length album, Both Hands, was recently released by sonaBLAST! Records, though its production began two years ago.

Two weeks in Austin with producer Erik Wofford were completed before family issues brought the band (including bassist Brandon Duggins) back home. Wofford later flew to Louisville to complete the album, and they recorded half of it in Zanzabar’s green room with a mobile unit.

Recording in Germantown also meant they could bring in friends and family, from members of The Ladybirds and VHS or Beta to Cheyenne Marie Mize and Carly Johnson, Jeremy’s singing sister.

The extra time gave the band an opportunity to think more about the music they love. Now over 30 and a father, a Cubs fan and a wine expert who loves running, Johnson is unconcerned with what is trendy in modern music, and he’s increasingly willing to reveal more of his true self through music.

“We’re not afraid to rock,” he boasts. “I think American bands have become really afraid to rock out.” The band never felt comfortable in the indie bin and continue redefining their sound in a way that might surprise older fans that haven’t heard them since they changed their name in 2008. “Why wouldn’t anyone want to do this kind of music? It feels really good.”

Johnson has gone through some personal upheaval since their last record and has increasingly taken to rocking out as he deals with it. The visceral nature of the music is more cathartic than sitting alone with an acoustic guitar. “I’ve got a lot I can whine about, but what’s the fun in that?”

Lately, Johnson says, they’re writing from their pelvises, not their brains. “We’re a damn rock band! We’re kinda mean. And we really don’t care what you think … We’re not afraid to write a song that sounds exactly like Def Leppard. That’s not necessarily a bad thing.”

While there’s only one direct “butt rock” song on the album, it’s the opener, “Get Wet.” The statement is clear. “It evens out a bit, it turns into a (more diverse) record, but if you can’t have fun, go home. I think that is a big part of our Cheap Trick love … The band, as a whole, we all love Cheap Trick.”

Johnson sees many today with their “big beards and long hair — they’re not doing anything with it.” He clarifies that he’s not referencing old pals My Morning Jacket (“They rock! I think they do a really good job of just being a rock band and appealing to the indie kids”). “I’m talking about the Iron & Wine kids … I’m sorry, there’s a lot of hair there; if you have that much hair, you should be able to rock!” he laughs.

The band had not scheduled any upcoming performances as of press time, but a listening party will be held at Nachbar on Aug. 9 at 9 p.m.