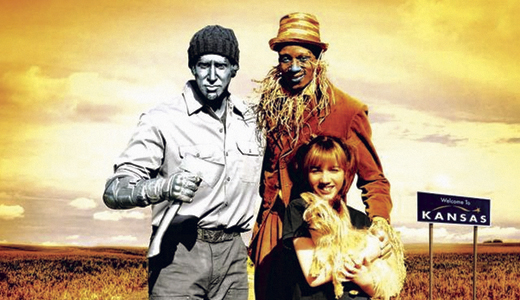 Original and unusual — two words you don’t expect to hear when discussing squeaky-clean family fare, but they more than apply to this tale of Elizabeth, a young orphan who fantasizes about what life must be like in Oz, now that the Wizard has floated away. Hark! What’s that knock at the orphanage door? Why, it’s the Scarecrow and the Tin Woodsman — and they’ve come to take “Dorothy” home! It gets kinda weird from there. Charming and surprisingly relevant.

The second full-length film from renowned French animator Jacques-Rémy Girerd, following 2003’s “Raining Cats and Frogs.” Done in traditional hand-drawn animation, this tale of a young girl who must muster the courage to find her father — and save our doomed world — required more than one-half-million hand-painted cells, each a painstaking work of art. Trust us, if you love great animation, this is a must-own. Our highest recommendation.

On April 20, 1999, a pair of disturbed teens opened fire at Columbine High School in Colorado, killing 12 of their classmates and a teacher for no apparent reason. Even today there is no rational motive for the shootings, which only increases the loss and frustration felt by the 13 families involved. This doc looks at those families, the different ways they have coped (or not) with the tragedies, their feelings about gun control, and the unusual, painful bond they share.

Robert Pattinson stars in this lavish costume drama based on Guy de Maupassant’s lusty 458-page novel. A penniless ex-soldier, he seduces Christina Ricci, marries Uma Thurman, and nails Kristen Scott Thomas on his way to wealth and power. Nice work if you can get it.

The inspired casting of Danny DeVito as the voice of Dr. Seuss’ environmental crusader drives this hip CGI-animated retelling. He rails against the shallow, shortsighted residents of Thneedville — including the voices of Zac Efron, Taylor Swift, Betty White and Rob Riggle — who have senselessly destroyed all the Truffula trees. Some good music (Efron and Swift, joyously, do not sing), a Greek chorus of warbling fish, and the always welcome Ed Helms as the mysterious Once-ler make this kinda fun; but, frankly, we liked the original 1972 short version better.

More kidvid safety fun this week as Fireman Sam puts away his hose and shows the other ways firemen save lives as they go up towers, down into wells, and scale scary cliffs for really crappy pay.

Those night-crawling East Coast plumbers are back again with more spooky adventures, including a study of a hotel so haunted that contractors involved in the renovation have walked off the job, refusing to return! We also liked the nights at a Pennsylvania asylum and a look at the sexy floaters of the French Quarter.

Another damn “found footage” flick, though admittedly more entertaining than usual. A quartet of attractive L.A. friends spend their nights roaming through supposedly haunted houses — then disappear after entering one with the address 1666. This movie chronicles what was found in that camera some weeks later, miles from the house. (Also: Check out the original “Knock Knock,” a fun, low-rent horror/slasher starring diminutive knockout Nicole Abisinio.)

A tiny sorcerer named Foible, the last of his kind, must defend our world and protect the all-powerful magic crystals with the help of Knot, his dragon-pup. A safe and not too scary cartoon all about believing in yourself and finding the courage to grow. Perfect for the wee-ones.

The best doc we’ve ever seen about the life of the late Bob Marley. And notice that we said “the life of” — most docs focus only on his better-known music and untimely death at 36. This one wends through his childhood, showing the trials inherent in being an ostracized, mixed-race kid in a poor village, and how this informed his music during the late ’50s and early ’60s. And it doesn’t shirk from Bob’s wild ways, including the uncountable children fathered with women other than his incredibly patient wife, Rita. At the end, you’ll feel like you’ve known Marley all his life. Excellent.

STRIKE BACK: SEASON ONE

To our knowledge, the original UK series on which this is based has never been shown here, but this American cable version has quickly become one of our favorite action-dramas. It follows the exploits of a beyond-top-secret military anti-terrorist group. To go into more detail would be pointless: It’s big, noisy and features good-looking people doing exciting things (often nekkid) to save the world from oily baddies. What more could you want?