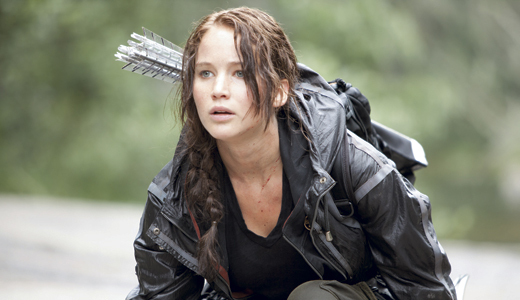 In the 15 years we’ve been writing this stupid column, we’ve never seen anything that compares with this. While filming an expansive HD documentary on chimps, the filmmakers captured a tragic event during a bloody simian raid (the chimps are killing and eating neighboring monkeys): a young ape’s mother is killed. He is doomed to die without her. And then — against all odds — he is adopted by an old male. What happens next can only make you pray that Darwin was right, and that we truly are related to these more-than-human creatures. Superlatives fail us. Go buy it.

Jennifer Lawrence continues to make her hometown proud in this generally faithful retelling of the first book in author Suzanne Collins’ dystopian series. As Katniss Everdeen, Lawrence is elevated from crushing poverty and starvation to the pinnacle of Panem culture, via a sadistic execution-cum-reality-show in which children hunt and kill other children for the entertainment of the masses, as punishment for a long-ago uprising. Lawrence shines, as does Liam Hemsworth, Elizabeth Banks, Woody Harrelson, Lenny Kravitz, and Donald Sutherland — kudos to all, but especially the author for reviving a long-neglected genre that speaks so clearly to the teenager in all of us.

Director Asghar Farhadi completely immerses the viewer in the complex class struggle of modern-day Iran by focusing on one marriage. A wife wants to leave her husband so that her daughter can have a better life abroad. The husband must stay to care for his aged father, so he hires a housekeeper to placate the wife. The housekeeper then quits on religious grounds, but offers her husband — who has his own baggage — in her stead. Then there’s a fight and someone shows up pregnant. So it’s just like “Jersey Shore.” Subtitled.

We loved this movie! Based on true events, director Richard Linklater (“Dazed and Confused”) casts Jack Black (who, by the way, never once breaks character) as the titular Bernie, an infinitely patient, truly compassionate small-town Texas funeral director. Bernie even befriends and tames snarling, sour old she-tiger Shirley MacLaine (!), becoming her business partner and best friend … before shooting her in the back and dumping her body in a freezer! (No spoiler there, it’s on the box.) Now add Matthew McConaughey to the mix and just watch what happens.

Actor Josh Lucas has had an impressive mainstream career, including roles in “J. Edgar,” “The Lincoln Lawyer” and TV’s “The Firm,” but here he dips into indie cinema for a quiet, more contemplative tale. At the peak of a successful career, a nameless businessman walks out, buys a broken-down boat and dedicates his life to fixing it. Artsy symbolism abounds with James Cromwell as “The Old Mariner” and Ayelet Zurer (“Angels & Demons”) as “The Waitress.”

A powerful and damning drama based on true events at a South Korean school for the healing impaired. Simply put: The faculty were largely brutal pedophiles who counted on the social isolation of their victims to avoid detection and prosecution — all with the willing assistance of the police, courts and churches! This outrage went on daily for at least four years before a new teacher arrived in 2000 and disclosed the truth. In Korean; subtitled.

We are not fans of Sacha Baron Cohen, but there are enough dumb sight-gags — most of them shown on the TV ads — to keep us distracted from Cohen’s typically self-indulgent mugging and bad taste. More offensive than funny, he plays a brutal African dictator who is dropped into rough life on the streets of NYC. Ben Kingsley is great, as usual, as the scheming underling who arranges Cohen’s downfall, and comic hottie Anna Faris is great as his angel of mercy.

Allll riiiight! Back in the ’70s, you might have caught this as “Truckin’ Man” at any drive-in in the Deep South. It’s a cheezy action-romp starring soap-star Michael Hawkins (Christian Slater’s dad!) as a college student who drops out to find the killer of his trucker-father. Along the way, he hooks up with bland blonde Mary Cannon (who will only show us one boob), who (spoiler alert!) turns out to be the daughter of one of the bad guys! With the wonderful Doodles Weaver (uncle of Sigourney) and the evil Larry Drake (“L.A. Law”). A true drive-in classic.

Wow! What a great little potboiler! Married Sheriff Ed Harris has been quietly banging bat-crap-crazy Jennifer Connelly for about 20 years. Nice work if you can get it, but when he decides to run for the Senate, he learns that his comely daughter (Emma Roberts) is dating Connelly’s son — a man on a quest to discover his real father. Will the sheriff’s secrets come to light? Connelly, in particular, is terrific, with help from red-haired vixen Carrie Preston (“True Blood”), Amy Madigan as the wife, and Yeardley Smith as the voice of Lisa Simpson.