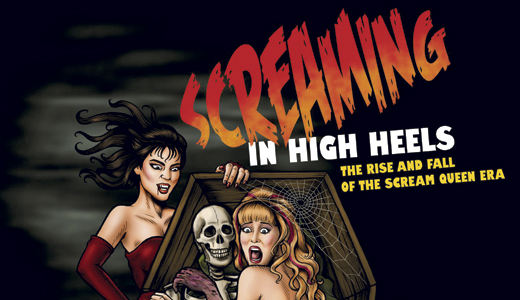 The horror genre has become so diluted and derivative lately that the really good stuff often gets lost in a deluge of teenybopper crap. That’s why you shouldn’t miss this simple-but-excellent spooker-thriller starring child-faced Gretchen Lodge (“Franklin & Bash”) as a newlywed moving into her deceased father’s country home. What happens next is a swirling miasma of mental illness, addiction and haunted-house tropes that play with your senses in brilliant, terrifying ways. No real gore, but some nudity, which is made terrifying by the writer of (believe it or not) “The Blair Witch Project.”

Brinke Stevens, Linnea Quigley and Michelle Bauer: If those three names mean nothing to you, then you are clearly not our kind of person. They were just ordinary, extremely attractive L.A. models scrounging for work in the 1980s when a landmark opportunity arose: direct-to-video horror! And overnight their looks, chutzpah and lack of modesty made them superstars. Future Penthouse Pet Brinke hit pay dirt in 1982 with “The Slumber Party Massacre”; lovely Linnea famously danced nekkid on a Louisville tomb in “Return of the Living Dead”; and Michelle Bauer’s topless intro to “Hollywood Chainsaw Hookers” will live forever. This doc looks back at The Terrifying Trio and acknowledges just how smart they were to play dumb. Simply wonderful.

American fans of UK’s Poirot series (ourselves included — “Masterpiece Theater” anyone?), now in its 12th amazing season with David Suchet as the fussy Belgian detective, are in love with these season-by-season boxed sets, and this one is no exception. Contains the wonderful “Hercule Poirot’s Christmas” (1995) wherein the detective’s holiday is spoiled by a death (of course), and “Murder on the Links” (1996), in which we discover that French golf is even dumber than the American kind.

If you were a fan of von Däniken’s “Chariots of the Gods” books, you’ll love this breathless bit of foolishness from Philip Coppens, star of the History Channel’s “Ancient Aliens” series. Did aliens guide the birth of human civilization? Do crystal skulls have psychic power? Were the pyramids built with tractor beams? No, of course not! But it’s fun to pretend.

This big-budget, big-noise, big-ship sci-fi actioner was dumped into theaters with a thud, but it was never meant to be taken seriously. Forget the credits, the star of this silly nonsense is clearly the too-friggin’-hot-to-believe swimsuit model, Brooklyn Decker, whose very name gave us woodies during the opening credits. With Taylor Kitsch as Cpl. Billy Beefcake, little Rihanna as Sgt. Bitty Betty Bang-Bang, and Liam Neeson as the guy trying not to look embarrassed while thinking of ways to kill his agent. Bigger dumber fun has yet to be invented — of course we liked it!

Empty-nester Diane Keaton, still adorable after all these years, becomes attached to a ragged foundling dog that hubby Kevin Kline accidentally loses after a wedding in the Rocky Mountains. They mount a search involving all the guests, leading to all manner of emotional experience — some funny, some touching, all loving. Ahhh. With Dianne Wiest, Richard Jenkins, Mark Duplass and Ayelet Zurer.

In this year’s breakout hit from Scandinavia, a low-life charmer/management-recruiter steals artwork to subsidize his lavish lifestyle. Then he meets a former mercenary who just happens to own a priceless bit of art, and the game is on. Stars Aksel Hennie as the likable scoundrel, Nikolaj Coster-Waldau (Jaime Lannister, “Game of Thrones”) as the baddie, and Synnøve Macody Lund as Hennie’s stunning goddess wife. Incredibly entertaining; highly recommended.

The quirky and unusual tale of the relationship between a 19-year-old student and his best friend, a 52-year-old spinster waitress who dreams of becoming a stand-up comic. They truly are constant friends until Nate falls for James, who is jealous of the time spent with Maggie. An exceptional comic drama about real people and real life. Outstanding.

Juliet Stevenson and Daniel Stern star as a long-married couple on a supposed family vacation in Malta. But she is secretly keeping a 25-year-old date with her first love. When hubby discovers the deception, he decides to get a little sumpin’-sumpin’ of his own, leading to an adventurous romance that causes his wife to realize what a stud muffin he really is. The execution doesn’t quite live up to the plot, but a bit o’ fun for old married farts nonetheless.

Boyish Zac Efron and lovely Taylor Schilling make an attractive pair of lovers in this romantic hogwash about a soldier who, after being saved from death by finding a blonde’s photo on the battlefield, decides that they must certainly have been meant to be together. He sets out to find her and, after a bit of nonsensical family drama, enjoys a well-lit PG-13 undie-peek sequence.

THE PIRATES! BAND OF MISFITS

We love anything that Aardman Animation produces (“Wallace and Gromit,” “Shaun the Sheep”), and while this isn’t their best work ever, it’s a jolly good tale of silly pirates, done right with star voice talent (Hugh Grant, Imelda Staunton, David Tennant, Salma Hayek, etc.) and a plot aimed squarely at the kiddoes — though 98 percent of the theater audience we saw were adults. Begins with The Clash’s infamous “London Calling” and ends with Aardman’s patented — and surprisingly Queen-bashing — bang-up action sequence. We liked it.

An over-the-top hi-tech action thriller from Hong Kong about a Special Forces officer, slowly being paralyzed by a bullet in his brain, who must save the world from terrorists and their genetically engineered strain of super-smallpox, all the while forging relations with a brother he never knew he had — who happens to be one of the terrorists! Whew! Wonder what he’s doing after breakfast?! Simply insane, in all the ways that make HK actioners so much fun.