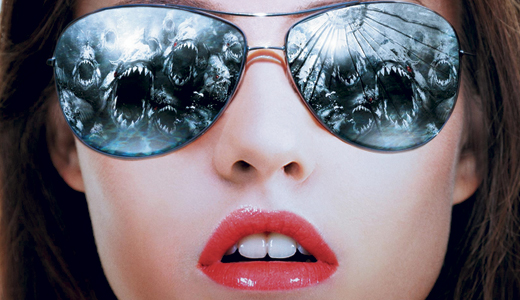 This tongue-in-cheek sequel to “Piranha 3D” — a truly graphic horror film that not only delivered the gore but had a nice, sick sense of humor — pales in comparison, but it’s not without its titular charms. Said charms are in wobbly abundance as hordes of topless 20-somethings go frolicking at a water park infested with hungry prehistoric boob-eating fish. Star Danielle Panabaker stays largely covered while co-star Katrina Bowden shows off her cute butt — unfortunately, so does David Hasselhoff, with help from Matt Bush, David Koechner, Gary Busey, and the incomparable Christopher Lloyd. A hoot; watch it with someone you inflate.

The long overdue Blu-ray release of the definitive ’80s over-the-top horror film. Jeffrey Combs will live forever as medical student Herbert West, a lunatic with a glowing reagent that brings the dead back to horrible, gut-ripping, sadistic (and often hilarious) life. Watching gorgeous Barbara Crampton get her licks from the disembodied head of David Gale is just one of the many twisted pleasures to be found in director Stuart Gordon’s ode to Lovecraftian excess. Simply a must-own for any true cult movie fan. Enjoy.

This sitcom is loud, crude, damn funny and unapologetic about it. Kat Dennings and leggy Beth Behrs star as struggling diner waitresses — one a once-wealthy debutante — who take the time-worn tradition of women-buddy comedies to places that Lucy and Ethel never dreamed of — like the ironic, hipster lifestyle of backwater NYC. Sometimes aboard their pet horse! If you’ve never seen it … fix that!

ATTACK OF THE HERBALS

There are so many zombie comedies out there, why are we promoting yet another one? Because it’s that good. A crate of exotic tea washes ashore in a tiny British seaside town. One sip, and the locals are hooked. It’s so addictive that it turns everyone into kill-crazed zombies! Has a nice “Shaun of the Dead” feel to it with Calum Booth, Steve Worsley and first-time actress Claire McCulloch.

This straight-to-video romantic drama in the Tyler Perry mode finds Garcelle Beauvais and Isaiah Washington, a happy, long-married couple about to move into their long-awaited dream home. But he avoids all that moving expense by revealing that he’s in love with someone else. Chick flick, anyone? Surprisingly funny and life-affirming, unless you have a penis.

School valedictorian Matt Bush takes his first hit of weed the day before principal Michael Chiklis institutes a harsh new drug-test policy. Bummer, duuude. So how’s Matt gonna graduate? By making sure everyone else fails their drug tests, too! And it might have worked if not for stealing the dope from a psychotic dealer. Head and shoulders above most recent stoner comedies, and now on Blu-ray with Adrien Brody, Colin Hanks, Curtis Armstrong and Yeardley Smith as the voice of Lisa Simpson.

This gonzo docudrama concerns one of the most bizarre true events in modern history: The Church of England — and one particularly frothing Catholic broadcaster — publicly accused the Monty Python troupe of blasphemy over their 1979 hit “Life of Brian,” and demanded that they recant. After much folderol, Michael Palin and John Cleese (as the voices of reason, no less) “debated” the topic on live TV. Here Darren Boyd, Charles Edwards, Tom Fisher and Stephen Fry recreate that swirling cultural miasma with perfect Pythonesque profanity, animation and drag-queen esthetics. Truly mind-blowing; with Ben Crispin as Jesus.

Eighteen-year-old wunderkind indie filmmaker Emily Hagins crafted this outstanding, damn entertaining, no-budget teen romance/vampire comedy that is guaranteed to blow you away. Sweet little Elaine Hurt meets pallid newcomer Patrick Delgado at a sci-fi convention and, after a bit of playful necking, finds a pair of scratches on her throat. And she’s getting really thirsty. Smart, funny, well-paced and brilliant in spots; you are gonna love this flick!

Frankly, the first few episodes of this unusual sci-fi-ish drama from Jonathan Nolan (“The Dark Knight”), with help from J.J. Abrams’ “Bad Robot” production company, left us cold, but it got better as the season progressed. Former spook/hitman Jim Caviezel, stone-faced as ever, reluctantly joins forces with Michael Emerson, a limping billionaire genius/security expert to prevent crimes predicted by a mysterious computer. Meanwhile, NYCers go about their daily lives unaware that their every move is being tracked, analyzed and recorded.

Jason Statham plays his usual silent tough-guy powderkeg in this quickie “save the youngster who knows too much” actioner — but that’s not a bad thing. His charge is 11-year-old Catherine Chan, on the run from the mafia/triads who want a numerical code she knows, and will kill anyone who gets in their way. Nobody does straight-up action/chase movies better than Statham.