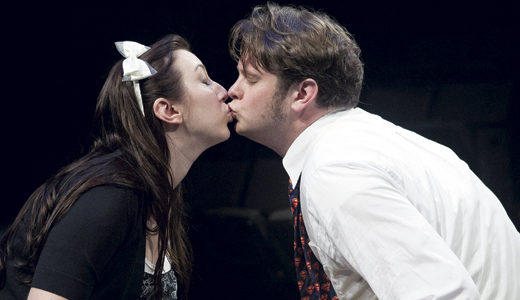 Doug rode his bike off the school roof. Kayleen has another stomachache because of her “bad thoughts.” Their unique friendship begins in the quiet, sterile nurse’s office, where the one-upping yet profound bonding experience of comparing scars and sharing sorrowful stories unfolds.

Rajiv Joseph’s rollercoaster of a script spans 30 years of Kayleen and Doug’s extraordinary bond. Mike Brooks and Leah Roberts skillfully and quite literally jump between various ages and crucial events of their characters’ lives together, leaving the audience cringing one minute, sniffling another, and then heartily laughing it off. Director Gil D. Reyes’ careful attention to detail (along with that of the design team) is evident in every element of the play, from the heaviest emotional onstage moments to the music clips between scenes.

The intimate seating in the Victor Jory and the audience’s proximity to the stage — along with Jay Tollefsen’s cluttered, battered-looking set — enhances the raw intensity of the characters’ journey, while their onstage costume changes emphasize their vulnerability and make a sensible and delightfully uncomfortable use of what would otherwise be dead stage time. The scene titles are legibly scrawled onto the floor with chalk and are unnecessary markers since Brooks and Roberts so clearly show time and place through their acting and costumes. But the layer of chalk dust that peppers everything in sight, along with the two beautifully metaphoric wooden swings as the focal point of the stage, give it a spot-on playground look.

The cast of two has no problem carrying the entire 80-minute show without losing energy or slipping into cruise control, especially with Joseph’s use of repetition in the script. Even when the two friends don’t see one another for several years, their conversation never seems to stop, which is something the two actors render very well, along with the growth and pain of the missing years. Brooks offers an emotionally honest and charming Doug, while Roberts’ Kayleen has years of agony bubbling up inside that she hides behind a façade of composed sarcasm. From the first moments of the show, their chemistry is palpable, and they effortlessly pull the audience closer to them, which is extremely important for this play to work. These characters are the epitome of human imperfection, but we feel for them, forgive them and stay on their side despite it all, just as the two friends do with each other, even when they have hurt one another in the worst ways.

As Reyes explains in his director’s notes, this play is not a typical love story — yes, their love runs deep, but Doug and Kayleen’s relationship is far more complicated. This piece captures the range of emotions one might feel in any intimate relationship and gives it visible wounds, blood and scars, with lots of laughter in between.