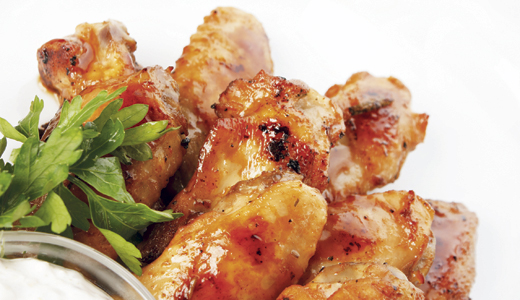 Ah yes, wings and beer — as much a part of football as pigskin, blood and bloated egos. But what to do if you eschew ingesting bird meat? I looked it up recently, and such people actually exist. Many of them apparently are called “vegans,” and they even have their own version of the hot wing. I was shocked, but I decided that, to be fair, I should at least try these strange things called “vegan wings” to see how close they come to the real thing.

And so it was that I descended upon Bluegrass Brewing Company in St. Matthews with my trusty sidekick Cynthia to do just that, and to wash these pseudo-wings down with a tasty American Pale Ale, in keeping with sacred chicken wing tradition.

Let me just start by saying this: The shriveled-looking “wings” — 10 of which can be had for $7.99 — do themselves few favors in terms of presentation. From what I could gather by looking, they were trying to approximate what has become known as a “boneless wing,” which is actually just a breaded hunk of chicken (with no bones) that is deep fried and then slathered in sauce.

And I’ll say this much: BBC has two solid sauces from which to choose in their barbecue and traditional buffalo versions. Furthermore, the breading in which these faux wings were battered was also fairly crisp and tasty. But nothing about the meat substitute seitan — not even the house-made stuff at BBC — resembles a fried chicken wing. In any way. Whatsoever.

“Oh, baby,” Cynthia said after taking the first bite of a barbecue vegan wing. “The texture is like a shoe insert.”

And this is not to knock BBC in any way. I was assured by both Cynthia and our friendly server Russ that this is exactly how vegan wings are supposed to look, feel and taste. At last, my taste buds had met their match. I ate two and a half and couldn’t go any farther.

When asked how popular these so-called “wings” are at BBC, Russ said, “I don’t sell a lot of them.”

He then went on to rave about BBC’s spinach burger, but he also admitted that he had never tried the vegan wings, before adding, “Strict, die-hard vegetarians like them.”

And there’s the rub. I enjoy meat way too much. As the saying goes, if nature had not meant us to eat animals, it would not have made them out of meat. “And made them so easy to catch,” Russ interjected.

Seitan is typically a wheat-based substance — it is sometimes called “wheat meat” — but Russ said BBC makes its seitan primarily with soy. Oddly, though, it didn’t really taste like tofu, which I actually enjoy from time to time. And while a few Internet blogs and articles claim that seitan becomes “surprisingly similar to the look and taste of meat when cooked,” I’m not buying it. Not for one second.

Actually, the buffalo versions were pretty well slathered in sauce and were mostly edible. Mostly. But for some reason, the barbecue version could not balance the flavor or texture. We didn’t finish them and ended up eating an order of actual chicken wings and some pretzel bread and beer cheese for dinner.

With Russ’s help, we came to the conclusion that if one chooses to be vegan, that’s great — but own it. Enjoy your seitan nuggets in good health, feel free to dip your veggies in buffalo sauce. Do whatever it takes. But why try to convince yourself you’re eating some sort of faux meat? If you are compelled to go that far, just admit that you crave the meat, and then order up some wings. Or don’t. Actually, I’d prefer the latter, because that means more chicken for me.

At this point, Cynthia and Russ started talking about tofu hot dogs. “There’s not enough ketchup in the world,” she said. Don’t even get me started.