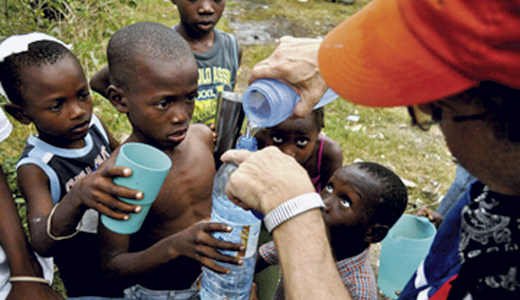 In 2001, volunteers with a small, local ministry traveled to Kenya as part of a humanitarian outreach project. The mission: install a basic water purification system to reduce potentially deadly waterborne diseases.

Over the years, this group had performed an array of worthwhile projects in developing countries, but this particular effort — water purification — resonated. They realized that something as simple as providing safe drinking water could save countless lives. After all, more people die from unclean water worldwide than from HIV/AIDS, cancer and war.

And so EDGE Outreach was born. Based in Louisville, the organization has grown over the past decade, both in manpower and scope.

Last month, the expanding nonprofit changed its name to WaterStep to better reflect its multifaceted mission: First, they collect gently used shoes for resale at reduced rates in developing countries. This, in turn, stimulates the economies of these countries and provides shoes to people who need them to help fight diseases caused by bacteria (e.g. tetanus) or parasites (e.g. guinea worms). Though beneficial, these efforts are first and foremost a means to generate funding to provide clean drinking water worldwide.

It might sound grandiose, but WaterStep has made extraordinary progress toward this goal, in part thanks to assistance from the Louisville Water Co., which has assisted in the development of purification technologies. In addition, the nonprofit’s goals have expanded; for example, in addition to delivering purification equipment — from hand-pumps to chlorine generators — the organization also responds to natural disasters. To accommodate such growth abroad, WaterStep’s home base is growing, as well. WaterStep recently purchased a 36,000-square-foot Old Louisville warehouse, which it will renovate for use as its national headquarters.

Along with its physical expansion, WaterStep’s workforce has grown, most notably with the addition of Metro Councilwoman Tina Ward-Pugh, D-9, now a full-time volunteer.

One of the councilwoman’s first priorities is to expand shoe donations. “I believe that we can fund our entire budget with shoe exports within the next three-to-five years, at the most,” she says. The plan is to start small, possibly by securing a multi-year commitment across all athletic departments at the University of Louisville to collect their athletes’ old shoes. She then hopes to foster an in-state competition to collect the most shoes between U of L and University of Kentucky. From there, she’ll set her sights on securing support within the Big East Conference, and possibly from other NCAA conferences.

Ward-Pugh also hopes to guide WaterStep into becoming a full partner in Secretary of State Hillary Clinton’s U.S. Water Partnership, aimed at utilizing American resources to solve global water challenges. Ward-Pugh says she is “confident that WaterStep will get their attention, and that they will help us figure out how to multiply all of the innovative technologies that we have come up with over the years… the secretary of state is our world ambassador, so to have those connections and ties is going to be very beneficial to us, especially in the sanctioning and credibility arena.”

In April, WaterStep Executive Director Mark Hogg had the chance to meet former President Bill Clinton while in Washington, D.C., for the annual Walk for Water. “When he saw our chlorine generator, he directly understood its cost-value. He knew that it would be able to take care of cholera and typhoid. He could easily grasp its sustainability, because it’s just a handful of salt and a car battery. For him to affirm us, to say ‘I get it’ … that was an amazing moment.”

In order to become a full partner of the U.S. Water Partnership, however, WaterStep will have to garner enough attention within an ocean of other water-based charities competing for recognition. In an effort to achieve that goal, WaterStep is planning Louisville’s first water symposium, christened IF Water, through the Idea Festival in September. Hogg has assumed responsibility for organizing the event, alongside Idea Festival founder Kris Kimmel.

“Our dream is to be the premiere international water resource event on the planet,” Hogg says. All local water experts are being considered to help present the symposium, from the Louisville Water Co. to GE, from Zoeller Corp. to Dow Chemical. Hogg hopes the presentation lineup will attract an international water interest in Louisville. “We want average people to leave with the relationships and tools they need to solve real water problems and save real lives.”