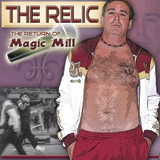 A parent’s love is sometimes best exemplified by their willingness to completely embarrass themselves in a misguided attempt at bonding. Magic Mill used to be a rapper in the early ’80s, and 30 years later got “challenged” by his son to “produce music that would appeal to modern-day hip-hop enthusiasts.” It’s worthy of an “awww” moment and some strings playing over a montage, and makes me feel like an asshole for typing these next words: Christ, this is awful. If Gitmo still tortures detainees with music, I hope our military never hears this album. Kid, don’t ever doubt that your dad loves you very much. Now tell him to zip up his damn jump suit and stop rapping. And you better not buy him an ugly tie for Father’s Day ever again. You owe him.