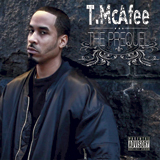 It’s been four years since T. McAfee’s excellent Courtesy of Self debut, and he’s been talking up The Prequel ever since. That gives the impression that he’s been formulating this concept all this time, for the follow-up to what this writer called “Louisvillmatic.” So is this It Was Written, or The Doggfather? Disappointingly, it’s somewhere in the middle. There’s good material: “4th Street” is great, a politically aware nod to the double standards of the city’s “go-to” entertainment complex, while the YngSteve-assisted “Duckets” is a true-school banger. What Prequel lacks is his first’s staying power. Many tracks have a rote similarity, hitting the same note repeatedly. Self played with expectations, bouncing between club and café with different flavors. The Prequel plays more as a collection of 15 random tracks than the follow-up to a classic.