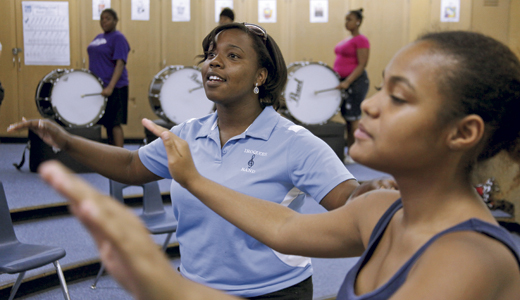 Nathan Herl, 15, is a talented musician who’d like to study music at the University of Louisville. He recently had an opportunity to transfer to Atherton High School for his junior year but opted to stay at his home school, Iroquois, because of loyalty to the band program there.

It’s not a story you might’ve heard 10 years ago. But since band director Linda Pulley arrived in the middle of the 2005-2006 school year, a transformation has taken place. There were a half-dozen serious band kids then, but that number has since grown tenfold.

“There wasn’t much of a program,” says Iroquois Principal Chris Perkins, who became an assistant principal there shortly after Pulley arrived. “She had a handful of kids … and they knew two or three songs. And they didn’t even know those songs all that well. To see what she started off with and has built in five or six years is just phenomenal.”

This is a story that screams out for a screenplay, probably too sentimental by half, about an African-American girl who escapes her tiny hometown in Western Kentucky farm country through talent, personality and will.

It’s the story of a band director who turns an economically challenged high school’s program into a point of community pride, and though the race angle could easily be played up, Pulley herself seems oblivious to identity politics.

She grew up in Morganfield, the county seat of Union County, 35 miles southwest of Evansville, Ind. The area is one of the commonwealth’s top corn producers.

Pulley’s father left North Carolina to pursue his GED at the Earle C. Clements Job Corps in Morganfield, then went to work there teaching culinary arts in 1967. In Evansville, he met his future bride, Marybelle, and they settled in Union County and raised three daughters and a son. Linda, 31, is the youngest.

Though she was a three-time state discus finalist at a school that expects to win state track championships, music was her calling, something she realized while watching her sister Tamara play clarinet. She understood music could take her beyond the cornfields, and the clarinet became a mission.

“I’d give her the all-state music to learn, and every day she’d want me to listen to her play it,” says Stephanie Scott Wallace, Pulley’s high school music teacher. “I’d give her advice, tell her to come back, and she’d come back every day — so much that piece of music was imprinted on my brain.”

Pulley earned a full ride to U of L and has been a Louisvillian since.

Beyond the usual directorial duties — marching band and concert band — Pulley inherited a guitar ensemble upon her arrival at Iroquois. She knew nothing of the instrument, so she took lessons.

Pulley spends hours after school giving private lessons and rarely leaves before 7 p.m. She buys reeds to keep on hand, and she’ll kick in for a kid who’s running short on paying for a band trip. She encourages them to learn multiple instruments — and loaned a saxophone to Herl, who taught himself.

Pulley is inclusive (Allen’s daughter, an incoming freshman, doesn’t play music, but Pulley vows to find a spot for her) and makes connections downstream (building a middle school feeder system) and up (taking kids to U of L performances and introducing them to people there).

Allen says band gives the kids incentive to take care of other matters; to participate, they must keep their grades up.

And like the half-dozen friends, students and co-workers contacted by LEO Weekly, Allen finds it remarkable how Pulley connects with kids. She accompanied the band to a competition at Holiday World and was surprised by their manageability.

“I asked, ‘How in the world did she do this?’ She gets them under control, that’s for sure.”

You don’t need to follow the news all that closely to know about Iroquois’ reputation as a struggling school. They know it, too.

Pulley doesn’t indulge negativity and makes a point of challenging the self-talk that tells kids they can’t succeed. She knows they can and expects it.

The change is evident.

Iroquois students now earn proficient and distinguished ratings at the annual Kentucky Music Educator Association recital. They make the Jefferson County all-star band. The band wins at the Holiday World competition. Two students joined Pulley and a couple hundred other teachers and students on a recent European tour. The marching band made a stir at the state fair last year. Kids are choosing to attend Iroquois because of the band. They’re earning college scholarships.

Two years ago, the Grammy Foundation awarded a $5,500 grant to the school’s music department, which includes orchestra and chorus as well. It was one of 20 grants nationally.

Orchestra director Chrissy Givan, who helped write the grant, says Pulley is a great colleague, and notes that the music teachers at Iroquois play a big role in the lives of their students.

“(We) have the right personality for that school. We can relate to the kids on their level. We respect them and expect them to respect us, and I think they want to work hard for us,” Givan says. “They know you are there for them academically and emotionally.”

“Obviously she has a gift and ear for music, but she also knows kids and how they respond to good instruction,” says Perkins, adding that Pulley can focus on one student in a sea of 45 or 50. “And she is confident enough in her abilities to say, ‘This is what we are doing and how we’re doing it, and I need you on board.’”

The band program, Perkins says, is one of the intangible parts of student development that can’t be gauged on assessment tests.

“As a society we put so much emphasis on (tests). We’re in the business of teaching kids and affecting lives, but so much of what connects to kids and gets them to school is elective. A lot of people in the education field don’t realize that or want to pay attention to it.”

“She’s like a mother to me,” says Michael Young Jr., who graduated from Iroquois in 2010 after transferring from Atherton. Young, a percussionist, is on a music scholarship at U of L, where he’s also in the marching band.

“She’s persistent, and she is motivated and motivating. She has high spirits. She shows tough love,” he says. “She is the main brain of the music department. There could be a movie made about her.”